Chiang Rai - The provincial harbour office is investigating a drop in the Mekong River's depth, which has become so shallow that many barges are forced to dock at local piers. 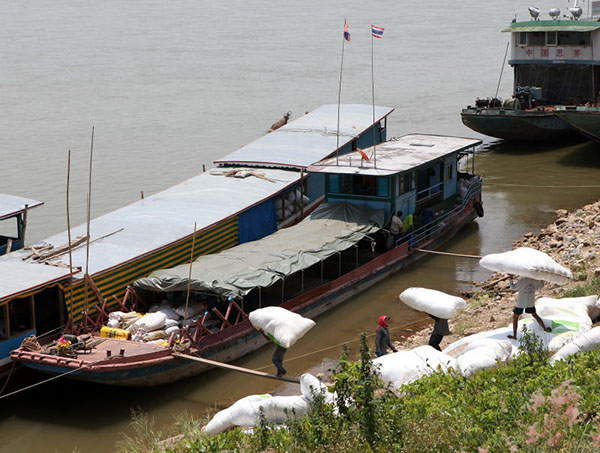 Workers of Chinese nationality are hauling loads into a docking vessel in Chiang Saen, Chiang Rai in May 2013. The vessel will go upstream the Mekong River to China. (Bangkok Post photo)

The office has sought answers from the Joint Committee on Coordination of Commercial Navigation on the Lancang-Mekong River, a panel represented by countries using the Mekong River for freight and passenger transport.

On Jan 1, a Myanmar-registered boat carrying frozen chickens sank in the Sob Yong area of the river, about 10km from central Chiang Rai.

Initial reports said the vessel, which was heading from Chiang Rai to Myanmar, hit an underwater rock. One crew member fell overboard and went missing in the water.

Damage is estimated at 20 million baht. It has not been formally confirmed if the accident was linked to the river becoming shallow.

Since Jan 1, many freight ships have remained docked as they wait to hear news about the river level. They are reluctant to set off fearing damage to their vessels if the water level keeps dropping.

The shallow water has exposed a vast stretch of sand bar opposite Ton Pueng in the town of Bo Kaew, Laos.

She said the authorities told her the upstream Jinghong dam in southern China decreased its water discharges three days ago.

Ms Pagaimas said most freight barges have been carrying less cargo to sit higher in the water.