Road fatalities during the New Year’s holiday fell 7% from a year ago, with 341 killed in the “seven dangerous days,” Interior permanent secretary Wiboon Sanguanpong said. 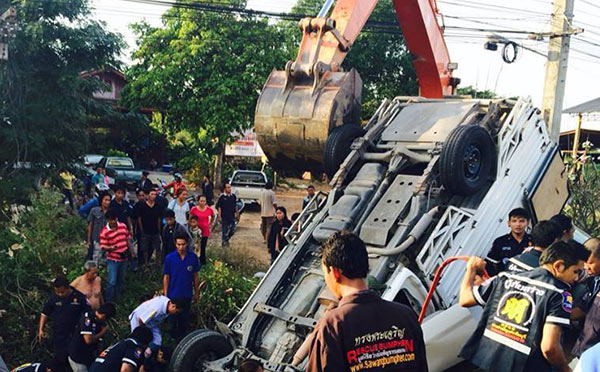 A rescue team tries to remove a car wreck from an accident scene in Prachin Buri on Monday afternoon.

On Jan 5, the last of the seven-day road-safety campaign, 265 accidents claimed 40 lives and injured 274.

Mr Wiboon said that although the government didn't set targets for this year's New Year's safety campaign, the across-the-board declines were satisfactory. But all agencies involved with road safety still had to do more regarding law enforcements, safety awareness and drunk driving.

Drunk driving remained the main cause of accidents, causing 37.3% of the crashes. And motorcycles were the main vehicle sending people to the hospital or morgue, involved in 82.3% of wrecks.

Chatchai Promlert, director-general of the Disaster Prevention and Mitigation Department, said cooperation from road users and effective law enforcement are necessary in order to reduce accidents.

Bangkok proved relatively safe: 44 of the capital's 50 districts had no accidents at all. Nationwide, 656 districts, or 74.71%, of the country also survived accident-free.

The deadliest time of day was 4-8pm, when 30.1% of accidents occurred. More than 52% of those killed were of working age. 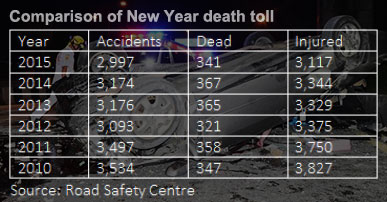