Thai exports to the European Union could shrink this year in the face of the continental bloc's continued economic slump, the Kasikorn Research Centre said on Thursday. 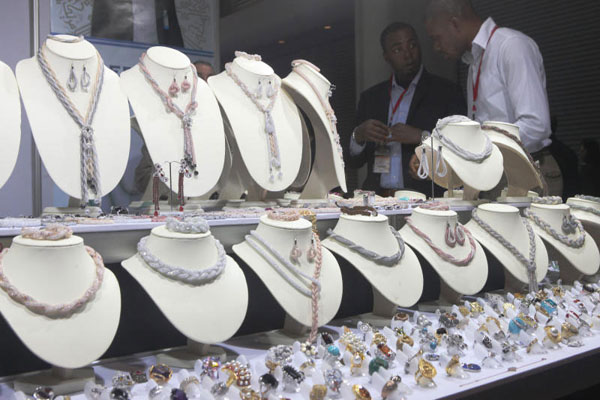 Gems and jewellery are among Thai exports facing negative factors in European markets this year. (Photo by Tawatchai Khemgumnerd)

The chance of rapid EU economic recovery was slim, the centre reported. The Thai baht had appreciated against the euro by 15.3% since early 2014 and lost competitiveness to the Vietnamese dong and Indonesian rupiah. The EU had also ended tax privileges worth $252 million for Thai products under its Generalised System of Preferences.

However, it expected that exporters of computers, computer components, automobiles, air-conditioners and electrical appliances could cope with the situation. They were part of the production chains of large industries and had cost-management flexibility.

The  euro's value had continued to fall and European consumers felt products from other countries were more expensive. Thai products also became even more expensive due to the GSP's termination of privileges.

Thai products would find it more difficult to compete with exports from Vietnam, Cambodia, Laos, Myanmar and Indonesia that continued to enjoy GSP tariff privileges, the research centre said.

Thai exports that earlier enjoyed GSP privileges accounted for 39% of all exports to the EU. In the first nine months of last year the value of GSP-supported Thai exports to the EU dropped by 1.69% year-on-year to $6.7 billion as a consequence, the Kasikorn Research Centre said.

It predicted a severe impact on Thailand's clothing, footwear and processed foods exports to Europe,  including seafood.

The reported suggested these sectors in the meantime stop focusing on manufacturing and look to gathering products from neighbouring countries for export to the EU, and that Thailand quickly seals a free trade agreement with the EU to make up for the lost GSP privileges.