Three insurgents were killed in a shootout and two other suspects arrested when a security team raided an Islamic religious school in Mayo district of Pattani on Friday morning. 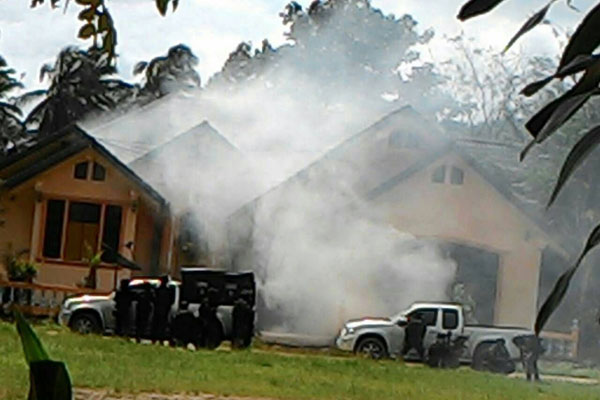 Security forces fire tear gas prior to moving against suspected insurgents holed up in an empty school in Pattani on Friday. (Photo by Abdulloh Benjakat)

The private religious school, Yuwa Islam Witthaya, is located in Ban Nam Sai of Luboh Yirai sub-district. Friday is a school holiday and the building was empty.

Security forces said they were fired on as they moved in to arrest the suspected insurgents believed to belong to a group led by Maruding Tahe.

After a five-hour exchange of gunfire the security team fired tear gas into the building before moving in. They found three bodies and arrested two other men. They were identified as Abdulloh Salae and Sabree Jeha.

Authorities allege that the suspected insurgents were responsible for killing four soldiers and injuring two others on the Mayo-Palas Road in Mayo district on July 28, 2012.