There and back on a single, narrow line
Thailand
General

There and back on a single, narrow line 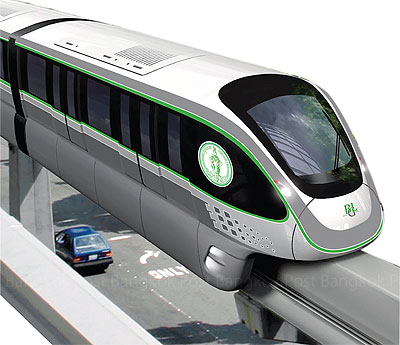 The latest idea is the proposed construction of the "Grey Line" monorail which will link Watcharapol and Tha Phra via Rama IX.

The BTS Skytrain is operated by Bangkok Mass Transit System Pcl, while the MRT subway is run by Bangkok Metro Public Company Ltd under a concession granted by the Mass Rapid Transit Authority of Thailand. The Airport Rail Link is operated by SRT Electrified Train, a State Railway of Thailand subsidiary, and runs to a total length of 84.8km.

Meanwhile, 76.8km of electric rail lines are under construction. About 180km of rail systems are in the pipeline.

Mr Amorn said the city administration decided to propose the monorail system plan to the government as the project requires a smaller budget for construction and a shorter period of time to complete than other rail systems such as the skytrain or the subway.

"The city monorail will serve as a feeder for city commuters in addition to what we already have," he said.

At the moment, city commuters rely on major feeders like buses, taxis, motorcycle taxis and boats that provide access from the city's main rapid transit systems to small roads, he said, adding these feeders are inadequate to cater to the increasing population.

Another popular feeder is Bus Rapid Transit, or BRT, a service especially for BTS users between Sathon and Ratchapruek which was initiated in 2010.

A source said City Hall initially planned to provide five routes for the BRT service around the city, but the service has largely been opposed by other public transport providers as lanes reserved exclusively for BRT buses are taking up space for other users.

"We have a difficult time providing BRT feeder services," the source said, adding the main drawback is the fact that buses can provide services only to a limited number of commuters.

Mr Amorn said the monorail system would be the city's answer to easing traffic congestion and to respond to the increasing need of commuters for stable feeder services.

Panya Consultants, Phisut Technology, Ensol and Trans Consult have been hired as the construction consultants for the Grey Line.

Under the contract signed between the city administration and the consultants, the companies will be paid 65 million baht for their professional consultations.

The consultancies' main tasks include conducting research studies for the project's overall operation along with an environmental impact assessment (EIA) study. They are also responsible for preparing documents and the EIA reports for City Hall to be submitted to state agencies.

Mr Amorn said research studies began in July last year and are expected to be completed by this summer.

Once the EIA stage is passed, City Hall will seek a contractor who will be in charge of the construction, he said.

The first phase requires an investment of 23 billion baht and will take about three years to complete, Mr Amorn said.

The first phase will help solve the problem of congestion in many business districts, he said, adding the route is expected to serve the needs of about 140,000 commuters daily.

The route will connect communities between the centre of the city and the southern suburbs and especially serve a fast-growing residential area of the city, he said.

The monorail project has high potential as construction will not cause the same kind of land expropriation as other rail systems. "It will be a lot easier to implement the project," the source said.

The monorail train line will cover land owned by City Hall so that residents will not be affected by it, he added.

The construction of the Grey Line monorail project was one of the top policies announced by city governor Sukhumbhand Paribatra as a part of his electoral campaign in early 2013.

The construction plan has been pushed through quickly, the source said.

If City Hall gives the green light for the project, the administration will ask the government for financial support, Mr Amorn said.

"We will seek assistance from other financial institutes to make the project happen. We believe the monorail system will help relieve traffic congestion in the city," he said. 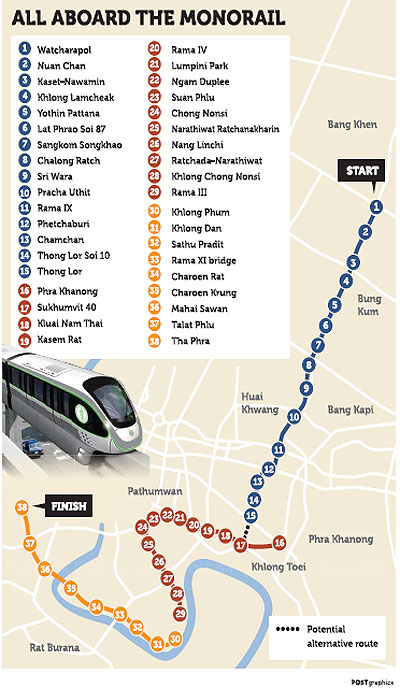