Youngsters who went with their parents to sign a well-wishing book for His Majesty the King at Siriraj Hospital were surprised when they received royal gifts on Children's Day yesterday. 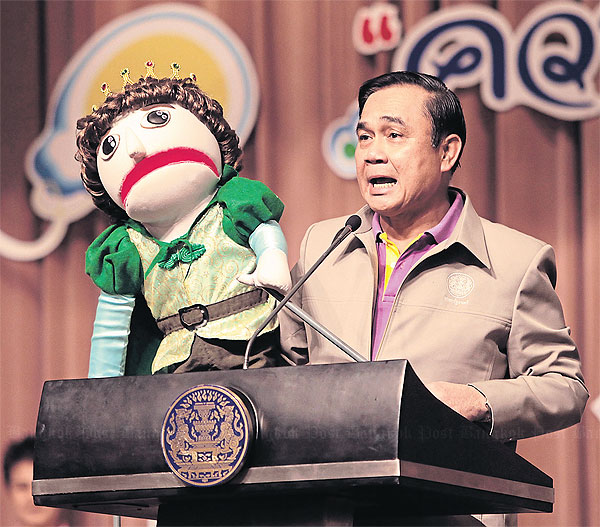 There are no strings on me: Prime Minister Prayut Chan-o-cha entertains children at Government House with a Frog Prince puppet to mark Children’s Day.

Distorn Vajarodaya, Grand Chamberlain of the Bureau of the Royal Household, brought a variety of the gifts from the King for the children.

Anchalita Kaewkongka, 12, said she and her parents left Nakhon Nayok for Siriraj Hospital yesterday morning to sign a well-wishing book for the King without knowing His Majesty would be providing presents.

"I'm extremely happy that I got a Mahajanaka animated film on DVD. I will watch it at home," Anchalita said.

Her nine-year-old brother, Krissada, said he received a notebook.

"I'm also happy to get a notebook. I will use it at school," he said.

Children who participated in the event at Government House were given the traditional annual opportunity to sit in the prime minister's chair in his office.

Gen Prayut called on the kids to comply with the "12 core values" that his government has set out for all Thai people to follow.

The prime minister wants all children to do their best for the good of the country by maintaining discipline, respecting laws and the elderly, and by putting the public and national interest before their own.

He also called on the children to show their parents how much they love them.

Gen Prayut greeted hundreds of children and parents with a Frog Prince puppet yesterday at a ballroom inside the Santi Maitree Building at Government House.

Gen Prayut said he remembered joining his first Children's Day event at the age of five. His mother took him to her school. He also recalled his childhood, saying he spent most of his time reading books so he could get good grades at school as a gift for his parents.

"Knowledge is very important for the country’s future," he said.

"Moreover, they should not ask their parents to buy expensive smartphones that could push them into debt."

Gen Prayut also serenaded the audience with his rendition of the song Jong Rak (Please Love) in front of the Santi Maitree Building. "I will sing this song to tell all of you to please love this country as much as I do," he said.