A Rohingya woman was crushed to death while being transported in a crammed pickup truck from Phangnga to Songkhla yesterday. 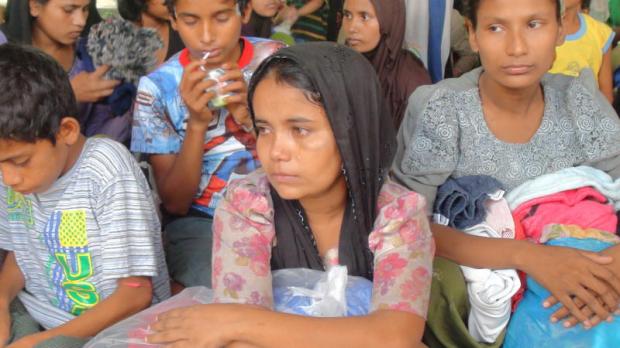 Rohingya migrants wait to be questioned at Hua Sai police station in Nakhon Si Thammarat after they were arrested early yesterday. Nucharee Rakrun

She was among 98 Rohingya migrants believed to have been smuggled into the country by a human-trafficking ring. They were arrested at a checkpoint in Hua Sai district of Nakhon Si Thammarat province early yesterday.

The dead woman was buried by workers from the Pracha Ruamjai Foundation.

He said the woman most likely suffocated and the others appeared exhausted.

Pol Capt Somporn said Hua Sai police set up the checkpoint on the Nakhon Si Thammarat-Songkhla road at Village Group 2 in tambon Sai Khao after obtaining information that a number of illegal migrants would pass through the district on their way to Songkhla.

About 4am yesterday, a convoy of vehicles was spotted heading towards the checkpoint.

Officers were able to stop five of the vehicles, but the rest escaped.

There were three four-door pickups, one pickup modified as a van and a Toyota Fortuner.

The drivers of three vehicles fled the scene and the other two were arrested. They were identified as Sawat Phadungchart, 29, of Ranong's Suksamran district, and Suthipong Chuaypat, 49, of Surat Thani's Chaiya district.

The migrants found in the five vehicles were later taken to Hua Sai police station.

They were then taken in small groups to Hua Sai Hospital for treatment. All had been travelling without food for two days, Pol Capt Somporn said.

The two drivers said they had picked the Rohingya up from a coastal area of Phangnga and were taking them to Songkhla.

Human trafficking rings have changed their routes from Andaman coastal provinces to provinces along the Gulf of Thailand to avoid strict suppression there, Pol Capt Somporn said.

Churin Khwanthong, chief of the social development and human security office of Nakhon Si Thammarat, said he assigned officials to interview each migrant through interpreters to find out if they had been victims of a human-trafficking movement.

If they were victims of human trafficking rings, authorities would find ways to deport them back to their country of origin, Mr Churin said.

Many local Muslims came to the police station to give food and clothing to the Rohingya after learning of their arrest.

Rohingya have fled their homes in Rakhine state in Myanmar via Thailand to Malaysia in increasing numbers recently.