Trang authorities took the most-aggressive legal action yet against illegal encroachment of public land in 2014, more than doubling the number of cases launched the prior year. 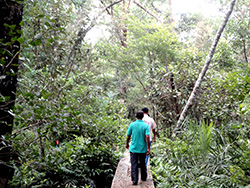 He said the crackdown came after the National Council for Peace and Order and the government ordered agencies nationwide to move against against destruction of natural resources.

The areas where poaching took place were in the Hat Chao Mai National Park straddling Kantang and Sikao district where the land prices soared because due to a boom in tourism. The encroached land mostly was turned into rubber and oil palm plantations.

Legal action was taken against poachers backed by large investors. The cases are now in various stages of prosecution, ranging from verification of land rights to court proceedings, he said.

Mr Monpatra expected a decline in forest poaching in 2015 due to tougher action by authorities responding to the government's policy of protecting natural resources.

Apart from the poaching suppression, authorities also are carrying out rehabilitation and reforestation projects aimed at increasing forested areas, which now cover about 23% of the province.