Six Thai women who carried surrogate babies for Japanese businessman Mitsutoki Shigeta are suing the Social Development and Human Security Ministry for the return of their children.

On Tuesday, the ministry’s permanent secretary Vichien Chavalit mistakenly said the lawyer for Mr Shigeta was pursuing the case. 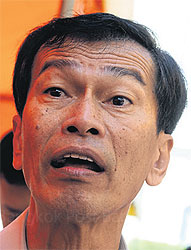 But he said yesterday it is actually the Thai mothers who have filed the suit with the Central Juvenile and Family Court.

The six women carried a total of nine babies, with three giving birth to twins.

The suit accuses the ministry of illegally taking away the babies.

Mr Vichien said the infants have been placed in the protective care of Pakkred Babies' Home in Nonthaburi, in accordance with the Child Protection Act 2003.

“The ministry has to ensure that everyone is protected and the facts about this surrogacy case must be disclosed," he said.

"We do not intend to take away anybody’s child but our responsibility is to protect them as best as we can."

The lawsuit, lodged in December, claims the ministry illegally separated the babies from their mothers, provided them with improper care and refused the mothers’ requests to raise the babies themselves.

Suwanna Pinkaew, director of the Bureau of Women and Child Welfare Protection, said all nine babies were getting good care.

“Every child being cared for at the babies’ home is receiving quality childcare and their development has greatly improved. The mothers are not prohibited from seeing their babies but must follow the home’s regulations,” Ms Suwanna said.

She said the six mothers requested custody of the children last year, but consent has not yet been granted because an assessment of their readiness, including job stability and family situation, is still in progress.

Ms Suwanna said the lawyer for Mr Shigeta had told officials at the babies' home that the Japanese grandfather of the children will visit them this month, but no formal notification letter has been submitted.

A source at the ministry questioned if the six mothers had sent applications seeking custody of their children to the ministry themselves.

The same handwriting appeared on all the forms.

Officials believe someone may be directing things from behind the scenes.