Opposition to prisoners on fishing boats

Thailand’s plan to use prison labour on fishing boats has drawn international condemnation because it does not address the real cause of human trafficking, which the government says it is trying to address. 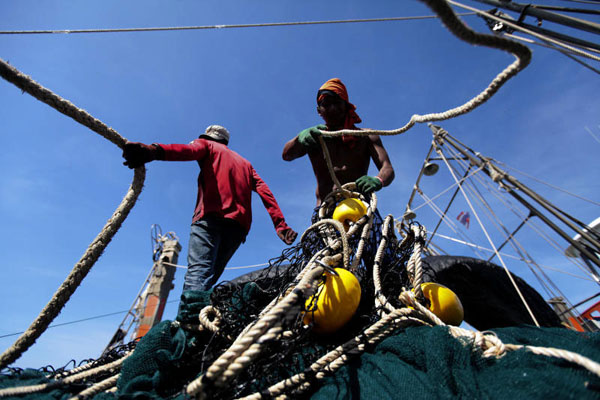 Using prisoners as boat crew could add to the suspicions buyers of Thai products already harbour about labour rights violations on Thai fishing vessels, according to a letter signed by dozens of labour and human rights organisations submitted on Thursday to Prime Minister Prayut Chan-o-cha.

The 45 signatories comprise non-governmental organisations and trade union bodies including the national labour federations of the USA, United Kingdom and Australia.

They proposed the prime minister call off a pilot project to recruit inmates from prisons to fill the labour shortage in the fishing industry.

“And sending prisoners to sea will not address the systematic, pervasive labour problems in Thailand’s fishing industry. It is time for the Thai government to recognize that its treatment of migrant workers lies at the heart of the problem and take real, meaningful steps to ensure all workers within its borders work in dignified, just conditions,” said Ms Gearheart.

The groups cited rights abuse as a primary reason for the labour shortages on fishing boats, and said the prison program would do nothing to end those abuses.

They also expressed concern that the plan would merely add to the problem, augmenting the migrant workers from Myanmar and Cambodia who comprise the majority of the workforce on Thai fishing vessels with prisoners who were equally vulnerable to abuse.

Migrant boat crews are almost entirely undocumented and without legal status. This makes them afraid to report the rights violations they suffer to Thai authorities, the letter said.

The letter warned the prison labour plan could have negative economic and political consequences for Thailand.

Western retailers and buyers were already increasingly wary, concerned that Thai seafood is produced in supply chains dependent on forced labour and labour rights abuses. This scrutiny would intensify if buyers have to deal with new concerns regarding conscripted prison labour in the supply chain, they said.

“The retailers we have worked with in Australia are very responsive to the threat of forced labour in their supply chains,” said Mark Zirnsak, director of the Justice and International Mission at the Uniting Church in Australia Synod of Victoria and Tasmania.

“We are working with them, and with Thai suppliers, to increase transparency and ensure just working conditions on Thai fishing vessels. We are deeply concerned that the prison labour program could make it more difficult for the industry partners we work with to verify workers in their supply chains are working without threat of coercion.”

The letter also noted that the plan could be considered evidence by the US State Department that the Thai government is unable, or unwilling, to address the issue of human trafficking in its fishing fleets.

Thailand was downgraded to the lowest rank, Tier 3, in the US 2014 Trafficking in Persons Report, and the fishing industry cited as a major area of concern.

“Thailand has repeatedly said that it’s committed to end forced labour and human trafficking, but this pilot project heads in precisely the opposite direction and will make things worse,” said Phil Robertson, deputy Asia director of Human Rights Watch.