Police and Ministry of Social Development and Human Security officials raided the clubs shortly after the midnight after a tip from a Lao 15-year-old teen who had called the Paveena Foundation's 1134 hotline on Dec 1. 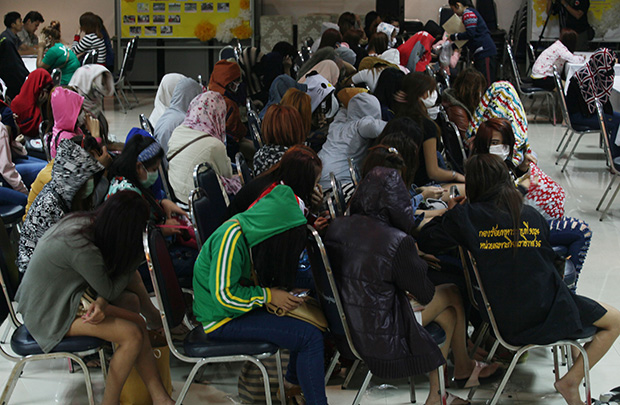 Some of the 72 Lao teens after being rescued from prostitutions in four karaoke dens in Suphanburi’s Song Phi Nong district early Thursday. (Photo by Apichit Jinakul)

Women's-protection advocates and the Foundation president Paveena Hongsakul said the girl claimed she, her sister and several friends had been tricked into working as waitress at a karaoke bar named New Kalong in tambon Thung Khok of Song Phi Nong district. After three days she said she had been forced into prostitutions there while her sisters and friends were subjected to to the same at adjacent three karaoke shops - Nong Great, Saeng Chan, and Nong Mai - next door.

New Kalong karaoke is owned by Narongsak Luengvilai, 39; Nong Great by Kaewdilok Meekaewnoi, 55; Saeng Chan by Korakot Supranont, 24; and Nong Mai by Suthipong Warin, 30. All four shops are connected via a rear section where more than small rooms are used for prostitution.

The police found that the karaoke clubs had 10-20 Laotian teens, aged between 14-20 years old, working.

All the owners were first charged with offering prostitution services. The ministry would later question all victims before deciding to file other charges.