Thailand, Myanmar, Laos and China have set up a joint centre to further clamp down on drug smuggling along the Mekong River. 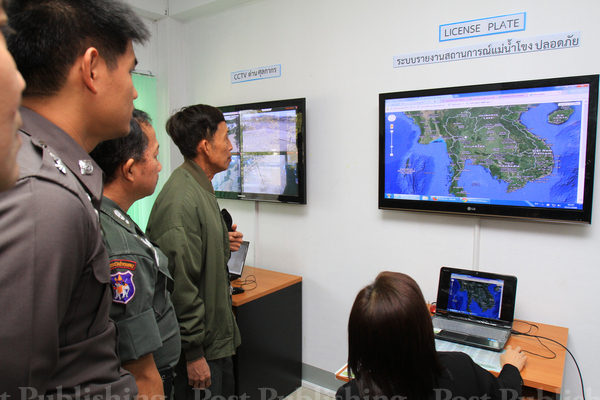 A Narcotics Control Board officer demonstrates how information on the Mekong River is tracked after the opening of the Safe Mekong Coordination Centre in Chiang Mai on Thursday. (Photo by Tawatchai Kemgumnerd)

The Safe Mekong Coordination Centre was launched on Thursday in Chiang Mai and will operate for three months. China, Myanmar and Laos each assigned two officials to join officers from the Office of the Narcotics Control Board, Royal Thai Navy, Royal Thai Army and Interior Ministry, ONCB secretary-general Permpong Chaovalit said.

The joint facility combats drugs through coordination on river and land patrols, information sharing, identifying targets and raids, and blocking the flow of precursors used to make drugs in their countries.

Justice Minister Paiboon Khumchaya said Thailand alone could not solve the drug problem on the river as much contraband is smuggled in from neighbouring countries. Help from its neighbours was crucial to resolving the crisis, he added.

China, led by the China National Narcotics Control Commission, has taken the lead in campaigning against drugs in the area after 13 Chinese sailors were murdered in 2011 on two cargo ships carrying 920,000 methamphetamine tablets. The bodies were dumped into the river about 25 kilometres north of Chiang Saen district in Chiang Rai, near the border with Myanmar and Laos.

Lao authorities arrested Myanmar drug kingpin Nor Kam and his gang in 2012 and extradited him to China on murder charges. He was sentenced to death in 2013 by China's highest court.

Beijing has demanded joint patrols on the Mekong since the killings and stepped up its role to combat drug-trafficking along the river used to transport goods between Kunming and the three downstream countries. Traffickers have taken growing trade opportunities to carry out their lucrative, illegal business by transporting drugs on cargo ships.

CNNCC deputy secretary-general An Guojun promised a serious effort to crack down on drugs, as three million Chinese citizens are addicted to methamphetamine pills, crystal methamphetamine and heroin. He admitted factories in China produced precursors and they are being targeted by authorities.

Myint Thein, deputy secretary-general of the Myanmar Central Committee for Drug Abuse Control, called for other countries to wipe out the widespread substances used to make illicit drugs.

The Myanmar officials said ethnic-minority groups were to blame for the drug problem in Myanmar.

"Once we have evidence pointing to any groups involved in drug production, Myanmar authorities use decisive measures against them,'' he said.

Bounpone Sirivong, deputy secretary-general of the Lao National Commission for Drug Control and Suppression, joined the launch of the centre on Thursday.