Somdet Phra Maha Ratchamangalacharn has signed an order under the 1962 Sangha Act to dismiss the monk from the council, effective from Wednesday. 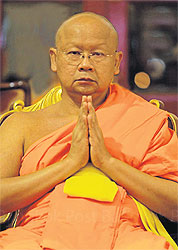 The director of the National Office of Buddhism (NOB), Phanom Sornsilpa, yesterday confirmed the dismissal.

Phra Phromsuthi will continue his roles as the abbot of Wat Sa Ket and the chief of Sangha Region 12. It is up to the monk’s direct superiors in the monastic governing hierarchy to decide if they will also discipline him, Mr Phanom said.

He said the move followed the start of an ongoing investigation by the Office of the Auditor-General (OAG) into spending irregularities in a budget of 67 million baht for the funeral rites of Somdej Phra Buddhacharn, also known as Somdej Kiew, the former acting Supreme Patriarch and the former abbot of Wat Sa Ket.

The probe came after Chaithanapol Srijiwangsa, who represents the People’s Network Organisation for the Security of the Nation, Religion and the King, lodged a complaint with the National Anti-Corruption Commission against Phra Phromsuthi.

Mr Chaithanapol had accused Phra Phromsuthi of embezzling money for the rites, by diverting it to a housing project for the monk’s relatives in Ayutthaya province.

Mr Phanom said yesterday the dismissal is aimed at allaying any public concerns and preventing any repercussions that could affect the SSC and the monastic community as a whole.

Mr Phanom said the OAG had informed His Holiness in writing about the spending irregularities three times.

The latest letter the OAG sent to the acting Supreme Patriarch was dated on Jan 8 this year, Mr Phanom said.

He said the next step will be to find a new monk to replace Phra Phromsuthi on the SSC.

Learning about his dismissal yesterday, Phra Phromsuthi only said he was willing to accept the acting Supreme Patriarch’s order.

The Yingluck Shinawatra cabinet approved a budget of 67 million baht for the funeral rites on Jan 21, 2014. The budget plan was proposed by the NOB.