Authorities have ordered the closure of a well-known karaoke bar in Chiang Mai for overcharging Malaysian tourists and operating illegally.

The group of eight Malaysian tourists told police they visited the karaoke bar at about 7am on Saturday. They ordered snacks and drinks and young waitresses were sent to entertain them by singing songs. After four hours they were asked to foot a bill of almost 120,000 baht, which they claimed was excessive.

The complaint prompted police to inspect the bar where they found evidence to prove staff had charged the eight Malaysian tourists 114,080 baht. The officers also found the bar was operating illegally. The management of the bar later agreed to return some of the money to the tourists.

Police authorities on Sunday ordered the closure of the bar and took action against them for illegally operation.

Pol Col Veerayuth said he ordered police investigators to take legal action against the operator for operating the bar without permission. The operator will be liable to a fine of 60,000 baht and/or a jail term of one year, he said.

He threatened to get tough with other nightspots overcharging tourists or operating illegally in the northern province.

The Malaysian tourists, first-time visitors to the province, said they were satisfied with the police action and would return, according to a source. 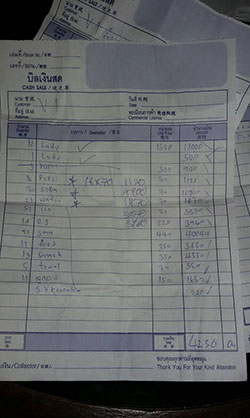 Samples of bills seized from the karaoke bar in Chiang Mai accused of overcharging tourists. (Photo by Cheewin Sattha)

The Advance Passenger Processing System (APPS) is being updated to check incoming air passengers for their health documentation ahead of their arrival as the country is set to reopen to international tourism starting next month, according to the Airports of Thailand (AoT).