A teacher was injured when a bomb planted in a drain was detonated while a morning motorcade of teachers escorted by soldiers was passing by in Bacho district of Narathiwat province Monday morning. 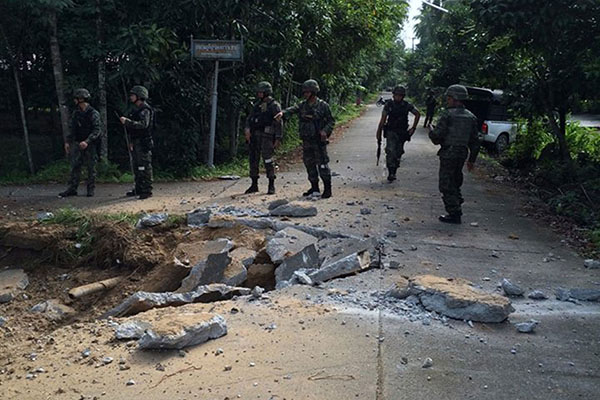 The attack happened at a junction at the entrance of Ban Buecho village in Bacho sub-district of Bacho district about 8.30am. The intersection is about 150 metres off a main road and is on the route followed by motorcades guarded by soldiers taking teachers to schools.

The bomb was made of explosives stuffed into a 20-kilogramme gas cylinder and detonated by radio, police said. Somjit Wongketjai, 59, a teacher at Ban Buecho School, received a slight shrapnel wound to her leg.

Mrs Somjit was riding her motorcycle in the motorcade. The bomb explosion damaged a pickup truck carrying six soldiers, blowing it off the road.