A group of taxi drivers at Suvarnabhumi airport has responded to a Japanese businessman’s online complaint about an overcharging cabbie by refusing to take any Japanese passenger. 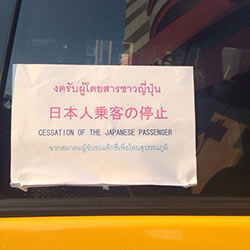 Twitter user @RehabbedO tweets the image with this message, "A Thai cabbie's response to a complaint by a Japanese that has gone viral."

Despite condemnation from the airport's taxi association and the Land Transport Department, drivers persisted Wednesday in putting multilingual signs in their cabs stating, "No Japanese." In broken English, the sign also read "Cessation of Japanese passenger."

Using the pseudonym "Koki Aki," the Japanese educational volunteer and internet toy-business owner on Sunday posted a scathing review of what he saw as Suvarnabhumi's many customer-service failings, particularly its taxi service. He said a driver of a sports-utility vehicle taxi tried to charge him 700 baht - double the normal rate - to take him to Bangkok's Saphan Khwai area without using the meter.

Although Koki never filed a formal complaint, officials quickly banned driver Chaiyan Charoensopha from working at the airport, which apparently didn't' go over well with his fellow drivers.

The "no Japanese" sign carried the name of the Taxi Driver Pauthai Suvarnabhumi Association, but association president Sadit Jaitiang said the group did not make or sanction it. In an interview with the Bangkok Post, he said it came from members who might have wanted to do something in response to what had happened after Koki's post.

"The association did not approve the sign, as it will damage the association," Mr Sadit said. "The person who put up the sign may be our member, but we didn't see when he put it up."

Land Transport Department director-general Teerapong Rodprasert, meanwhile, said any taxi spotted with such a sign would be fined 1,000 baht.

Koki, who in a Tuesday interview with the Bangkok Post said he regretted the uproar his post caused, continued to fan the flames of controversy Wednesday by posting to his Facebook page that he didn't believe banning problem customers was a solution to the problem.

"If Japanese people see this image, they will not feel good about Thailand and I feel sorry too," he wrote.

Koki has since deleted his Wednesday post, claiming he received a message from Suvarnabhumi's director that the photo of the sign was not from the airport taxi, but created to destroy the image of airport taxis.

In the deleted post, Koki wrote that if drivers feel that they have to negotiate fares to survive - rather than use the meter - drivers and the Land Transport Department should discuss regulations to allow them to get higher fares from passengers, he wrote.

He urged the public to consider the situation at the airport where passengers often arrive as a group with four or five pieces of luggage that do not fit in compact-car taxis.

"If you have to go with a large car, should you pay extra? Let talk based on the facts, not the legal issue," he said.

"Passengers pay tens of thousands of baht for an air ticket. Why can't they pay a few hundred baht for a negotiated fare," he asked.

Mr Sadit noted that the military had looked into taxi problems at the airport and there had been discussions on how to resolve similar problems, even before Koki's viral post. He said the Land Transport Department now should take action to set clear fares for small and large taxis, as is done in other countries. He pointed out Japanese taxis, for example, charge higher fares at night.

"If you go to Japan, a taxi ride (from Narita airport to downtown Tokyo) is about 4,000 baht, but in Thailand, it is only a few hundred baht to go to Sukhumvit or Silom," he said. "And the taxi has to go back to the airport with no passengers."