The Royal Thai Police Office (RTPO) will meet officials from the New Zealand embassy in Bangkok next week to seek the extradition of lese majeste fugitive Ekkapob Luara, aka Tang Achiva. 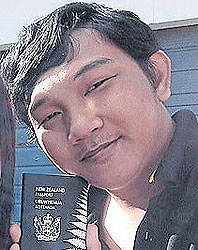 Police say they have credible information the suspect is in New Zealand, and they want cooperation from New Zealand authorities to bring the suspect back to Thailand to face charges.

Although Thailand and New Zealand do not have any formal extradition agreement on criminal suspects, the two nations enjoy a cordial relationship, said assistant national police chief and spokesman Prawuth Thawornsiri. In this case, Pol Lt Gen Prawuth said he believed a "diplomatic channel" could be an option for securing Mr Ekkapob's extradition.

At next week's meeting, the RTPO intends to ask the New Zealand diplomats whether the lese majeste suspect has been granted New Zealand citizenship as reported. Mr Ekkapob is believed to have fled the country after the May 22 coup last year.

The RTPO's foreign affairs division also has sent copies of a court warrant for Mr Ekkapob's arrest to Interpol. It wants Interpol to issue a red notice signalling its 190 member countries to keep an eye out for Mr Ekkapob in the event he leaves New Zealand for another country.