Cyber bill powers to be scaled back
Tech

Cyber bill powers to be scaled back

Legislators have bowed to pressure over the controversial cybersecurity bill, promising to add a clause which would require authorities to seek court approval before accessing web users' personal information.

Surangkana Wayuparb, chief executive of the Electronic Transactions Development Agency, admitted on Saturday that the draft legislation had been "rushed" and would hand the government excessive power.

The ETDA is working under the Information and Communication Technology (ICT) Ministry, and is responsible for drafting 10 new laws as part of the government's digital economy policy.

"We admit our mistakes, particularly Section 35 of the Cybersecurity Bill, as our working team had to rush to draft all 10 bills so we could enforce them before the next general election," Mrs Surangkana said.

Section 35 would allow the national cybersecurity committee to access people's personal information through email, telegraph, fax and electronic devices in the name of national security.

The section does not state whether authorities would have to seek court approval or not, raising fears it would accommodate human rights and privacy violations as well as impede foreign investment. 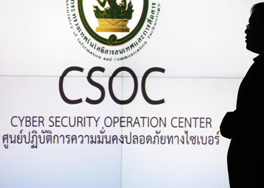 The Cybersecurity Bill was among eight digital economy-related bills which earned cabinet backing early this month, on top of two others which received preliminary approval last month. But is has since been subject to complaints from experts and privacy activists who have urged a revision to prevent abuse of power by the state.

Mrs Surangkana yesterday said the government was listening to the criticism and was willing to make amendments.

"Currently, all 10 digital economy bills are under the scrutiny of the Council of State, and each piece of legislation needs four rounds of review before being submitted back to the cabinet again," she said.

After passing cabinet for the second time, the bills will be forwarded to the National Legislative Assembly for approval.

Mrs Surangkana was speaking at a public forum titled "The reform of digital economy-related laws" at her office on Rama IX Road. The forum was aimed at gathering public opinion on the legislation, which has mostly been viewed as impractical.

She said the ETDA will initially ask the Council of State to send back two bills that are currently under scrutiny so that public hearings can be held.

She did not specify when the amendment to Section 35 of the Cybersecurity Bill would be made.

"We want to ensure that the exercise of power will be balanced. [The bills] need to be rechecked to protect the rights of all citizens," Mrs Surangkana said, adding that the ETDA expects that all 10 bills will become law by the end of this year.

Maj Gen Pichet Kongsri, a member of one of the eight digital economy working groups chaired by Deputy Prime Minister MR Pridiyathorn Devakula, said the cabinet was not involved with drafting the 10 bills.

He said cabinet members only approved the drafts in principle as part of measures to promote the digital economy.

"We welcome public opinion and insist that we do not have any intention to use the Cybersecurity Bill for political purposes or use it to violate the basic rights of the people," he said.

Mrs Surangkana said the Cybersecurity Bill would improve infrastructure to deal with hacking problems and is not designed to regulate content.

Thailand is ranked third in globally for cybersecurity risk, with hackers frequently using the country as a base for major attacks, including the recent high-profile cyberhack against US-based Sony Pictures Entertainment.