Tanasak to sell progress to US
Thailand
General

Tanasak to sell progress to US

Prime Minister Prayut Chan-o-cha has ordered Foreign Minister Gen Tanasak Patimapragorn to convince the US assistant Secretary of State for East Asia and Pacific Affairs that Thailand is on course to democracy. 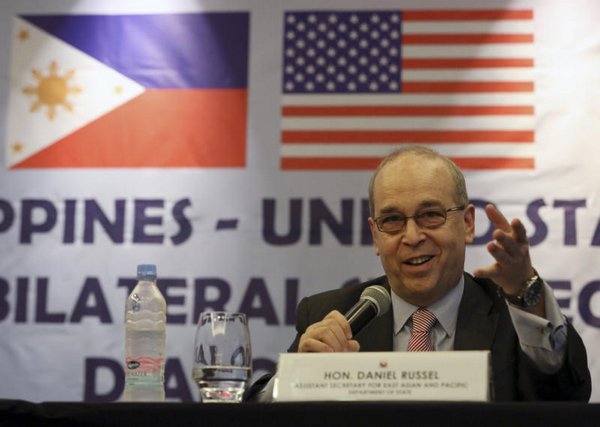 Daniel Russel US assistant secretary of state for East Asian and Pacific affairs, arrives Monday in Bangkok from the Philippines, where he co-chaired the the fifth Philippines-United States Bilateral Strategic Dialogue. Mr Russel is the highest-ranking US official to visit Thailand since the coup, and will hold talks covering a wide range of topics including democratic reforms and human trafficking. (AP photo)

Gen Tanasak has also been asked to explain progress made by the government to improve its human trafficking record.

Daniel Russel, who arrives in Bangkok Monday, is the highest-ranking US official to visit Thailand since last year's coup. His trip marks a crucial step for Thai-US diplomatic engagement, Maj Gen Weerachon Sukontapatipak, an adviser to the government spokesman teams, said Sunday.

Gen Prayut has asked Gen Tanasak, who is also a deputy prime minister, to explain the country's political progress to the US envoy.

He has asked him to highlight how the government's roadmap has been put in place to solve the country's problems, and explain the national reforms underway before the country holds its next elections.

"The premier recognises Mr Russel's visit is an important opportunity for the government to explain progress under its roadmap," said Maj Gen Weerachon.

Human trafficking also will be high on the agenda after the government handed a progress report to US Charge d'Affaires W Patrick Murphy last week.

A full report will be sent to the US State Department at the end of the month.

Thailand has been intensifying measures to improve its human trafficking record since it was downgraded from Tier 2 to Tier 3 last year on the US Trafficking in Persons report.

The trip was scheduled before the impeachment process, said Maj Gen Weerachon.

Panitan Wattanayagorn, a professor at Chulalongkorn University's faculty of political science, said the visit is a good sign the Thai-US relationship is still healthy after 182 years.

The US has strict practices when dealing with countries where coups depose legitimately elected governments, but Mr Russel's trip will reaffirm close ties, said Mr Panitan.

"It was difficult to deal with the US after the coup, but the situation gradually changed after things became more stable here. The US is one of several countries which have improved relations with us since the coup," Mr Panitan said.

Close engagement between Thailand and China could be among the factors that made the US keen to resume its close relationship, he added.

The US envoy may use his visit to express concern over the political situation. Mr Russel may want to hear the views of political parties and civil society on this issue, Mr Panitan said.

The US envoy will meet government officials and civil society representatives, and give a speech at Chulalongkorn University.