Thai Airways International will reduce its workforce by 20% through buyouts and attrition over the next five years, government and labour union officials said Tuesday.

Transport Minister Prajin Juntong confirmed THAI would not lay off any staff, but said the national carrier would see its employee numbers cut through retirement and early-retirement programmes. 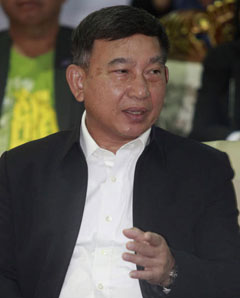 The minister said the workforce would be downsized because its fleet of some 100 aircraft would need only 16,000-18,000 workers.

The loss-ridden national airline, of which the state is the major shareholder, employs about 25,000 people. As part of an announced overhaul, management will cut 5,000 employees to bring the workforce to about 20,000, a figure approved by ACM Prajin.

The minister said staff cuts would happen through normal and early retirement and there would be incentives to encourage workers to retire early.

"The reduction in the workforce will initially require a budget to compensate those who retire early, but, in the long run, it will be worthwhile because THAI can cut its administrative costs," ACM Prajin said.

The minister also confirmed that THAI's Thai Smile subsidiary would not be disbanded, although its routes would be realigned.

Damrong Waiyakhanee, president of THAI's labour union, said airline management told him that the workforce reduction could be completed within five years as 500 people normally retire annually and management plans to encourage another 500 to take early retirement each year.

He added that about 1,000 out of 8,000 contract staffers would be terminated.

Based on financial statements submitted to the Stock Exchange of Thailand, THAI lost 9.2 billion baht in the first nine months of last year, with total debts of 262.5 billion baht. The state enterprise recorded a loss of 12 billion baht in 2013.