Pongpat sent to prison for 6 years in first case

Disgraced former Central Investigation Bureau chief Pol Lt Gen Pongpat Chayapan and five other policemen were sentenced to 12 years in jail, commuted by half because they confessed to charges of lese majeste and involvement in illegal casinos, on Friday. 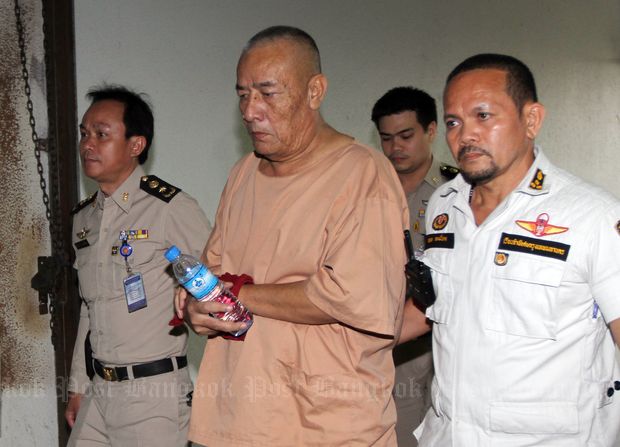 They also pleaded guilty to charges in two other cases at Bangkok's Criminal Court, but the judge only ruled on the casino case on Friday.

The former policemen were accused of lese majeste, demanding and accepting bribes from oil smugglers, involving in casino operations and soliciting bribes from CIB officers in exchange of promotion and transfers.

The six men were taken  to the court from Bangkok Remand Prison on Ngam Wong Wan Road after prosecutors filed the charges against them in three cases on Thursday.

Prosecutors identified the Colonze gambling den, a large casino in Bangkok's Wang Thong Lang district which has since been closed.

On the lese majeste charge, the duo allegedly put the Royal Crest pin on their shoulders and put a badge bearing the portrait of HRH Prince Dhipankara Rasmijoti, the son of HRH Crown Prince Maha Vajiralongkorn and the former HRH Princess Srirasm, on their left pockets at all times to indicate the casino they were protecting had the palace's backing.

The indictment said some oil smugglers in the Gulf of Thailand area  paid Pol Maj Gen Kowit, who then transferred the money to his boss, in exchange for not arresting them. The total amount was 147.4 million baht.

The indictment also stated they committed lese majeste because they wore police uniforms with a badge bearing HRH Prince Dhipankara Rasmijoti's portrait on the pockets when they solicited the bribes. Pol Maj Gen Boonsueb also allegedly pointed to the badge and claimed the bribes would be submitted to their supervisor and then to the prince.

They each demanded 3-5 million baht from officers who wanted to be favoured. The officers then paid them in the range of 10,000 baht to 2 million baht a month.

After the judge read the charges, the six former policemen pleaded guilty to all charges. The court will hear plaintiff witnesses in two other cases on Feb 23.