After several years of chasing a suspect accused of scamming Japanese businessmen and tourists out of more than 100 million baht, police have arrested alleged serial fraudster, <i>kathoey</i> Uthai Nanthakhan. 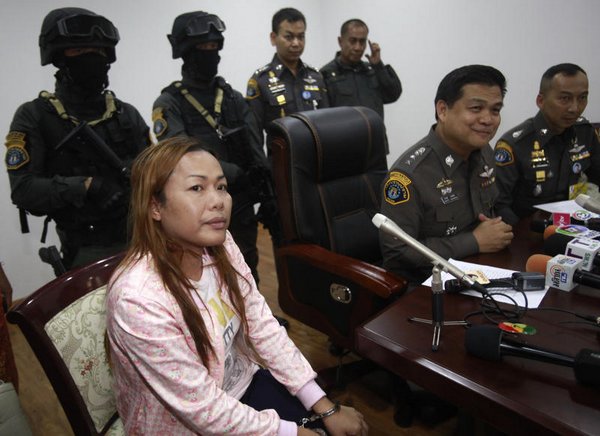 Uthai Nanthakhan, 40, told police and the media the details of a con game she said she has used for 10 years to trick Japanese out of huge sums. (Photo by Thanarak Khunton)

Police received a tip-off the suspect was hiding in the building. They lay in wait for a day at the apartment but Ms Uthai did not appear.

Police decided to ask people who lived in the apartment whether they knew Ms Uthai and showed them her photo.

Police cordoned off the building and finally arrested Ms Uthai after one resident gave them the suspect's room number.

According to the warrant issued by the Bangkok South Criminal Court, charges of theft, illegal detention and credit card fraud are being pressed against Ms Uthai.

Ms Uthai approached the Japanese pretending to be a foreign traveller who had lost her wallet. Victims would feel sympathetic and offer her money, but Ms Uthai would not accept. Instead, she would ask victims if it was possible for her family overseas to transfer money to their bank accounts. Only then would she agree to take their money.

The suspect would then forge an SMS message to herself, pretending to be a bank, saying her relatives had transferred money to the victims' accounts.

Ms Uthai would tell the victims they would not be able to withdraw the money until it had cleared in the next three or five days.

Victims would believe this and offer money in advance.

Ms Uthai would take the money and her victims would never see her again.

The hunt for Ms Uthai began after the Japanese embassy informed the CSD that a number of Japanese businessmen in Thailand had been conned out of huge sums.

However, Pol Sgt Maj Yutthaphon stepped forward to handle the case. He had been trying to track down Ms Uthai since 2010 when he was a police investigator at Thong Lor police station.

Ms Uthai slipped through Pol Sgt Maj Yutthaphon's fingers and was later nabbed by the Metropolitan Police Bureau in 2012. She was released the same year after serving eight months behind bars.

Pol Sgt Maj Yutthaphon started to look for clues and witnesses from the Japanese embassy. He found three cases occurred early this year, and 18 cases in 2014.

Most of the Japanese victims did not file complaints with Thai authorities and instead complained to the embassy. Some cases did not receive attention from police and so no warrant was issued for Ms Uthai.

After piecing the evidence together, he concluded Ms Uthai was responsible for the crimes.

Despite all the information in his possession, Pol Sgt Maj Yutthapon still had to figure out how to nab the suspect as quickly as possible because it would take some time to issue a new warrant.

He started searching criminal records at Thong Lor police station and came across a warrant that had been issued for Ms Uthai in 2005 and used this to nab his suspect.

According to police, Ms Uthai has been committing offences for more than 10 years. She convinced at least 100 Japanese victims to part with about 100 million baht in cash.

Ms Uthai would usually manage to obtain at least 25,000 baht from a victim. However, one victim was reportedly conned out of two million baht.

In the latest case which occurred on Jan 21, the suspect swindled a Japanese man out of 90,000 baht.

Ms Uthai confessed to police that she targeted the Japanese because she was angry at a Japanese man who had once taken her on holiday to Koh Phi Phi in Krabi and abandoned her.

She said she would pick businessmen or victims likely to have some business knowledge because they understood more about banking and could understand the money transfer process in her con game.

Pol Lt Col Torsak said he has asked the Japanese embassy to get Ms Uthai's victims to file charges with police. The more cases filed against her, the heavier her sentence will be once convicted. He warned tourists to be cautious and advised them not to lend money to strangers.