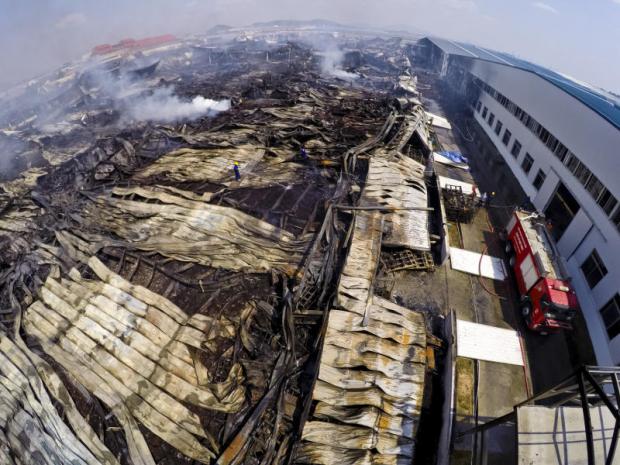 An aerial photograph shows extensive damage to the warehouses of LLIT Thailand Co, a tyre plant that was gutted by fire on Sunday, at Hemaraj Industrial Estate in Chon Buri's Si Racha district. No one was hurt by the blaze. Krit Promsaka Na Sakolnakorn

The fire which gutted LLIT Thailand Co's six warehouses on Sunday night caused more than 1 billion baht in losses as 700,000-800,000 tyres, which were due for export to the US, were damaged, a company executive said.

No one was hurt in the fire, contrary to earlier reports of casualties.

The firm is a subsidiary of Shandong Linglong Tire, a major Chinese tyre producer.

The suspension is in line with the Factory Act, which allows authorities to inspect buildings to ensure safety and monitor air pollution, according to IEAT governor Verapong Chaiperm.

Fire-fighters fought the blaze for about five hours before finally bringing it under control about midnight.

Mr Verapong said water used to douse the fire will be sent to water treatment plants.

"We want to ensure the safety of local communities, so we will also perform air checks for another three days until we are sure there are no more effects from the fire," he said.

Despite the losses, the plant's production line was not damaged, he said.