Fewer US troops in Cobra Gold

The US contingent taking part in this year's Cobra Gold joint military exercise in Thailand has been reduced from 5,000 to about 4,000 soldiers, supreme commander Worapong Sanganetr said on Tuesday. 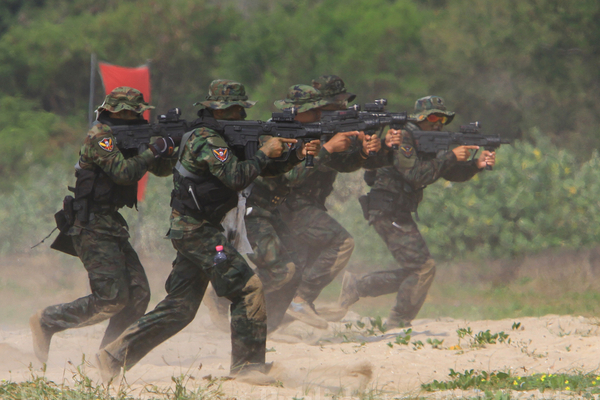 Cobra Gold war exercise joined by troops from the US, Korea and Thailand. The exercise was conducted at Had Yao, Chonburi's Sattahip district in February 2014. (Bangkok Post file photo)

Gen Worapong said the United States originally planned to send about 5,000 troops drawn from the army and the marines to join in the wargames.  The number would drop to about 4,000 because a US navy "warship"  had run aground in Japan.

He did not name the  ship. However, the US Navy Times website reported that a maritime prepositioning ship, the  Sgt. Matej Kocak, ran aground six miles (9km) off the coast of Okinawa, Japan last Thursday, quoting the US 7th Fleet command.

The Sgt. Matej Kocak, a Military Sealift Command ship led by a civilian crew, ran aground off the coast of Uruma. It is roughly equivalent to an amphibious assault ship, the report said.

There were 38 civilian crew aboard, as well as 67 US army personnel and 26 marines the US Navy Times report said. None were injured.

Asked about the abrupt cancellation of a joint press briefing on the war games with US charge d'affaires W Patrick Murphy on Feb 2, the supreme commander said it was feared that reporters would raise political questions.

The planned press conference was cancelled with no reason given after news of China's new involvement in Cobra Gold, with a few troops involved in civil rescue exercises for the first time, was released.

Cobra Gold, the largest joint military exercise in the Asia-Pacific region, was first held in 1982 as an annual bilateral exercise to consolidate defence relations between Thailand and the US.

The exercise this year will cover areas under the jurisdiction of the 1st Army in the central region and areas under the navy and in Chon Buri, Rayong and Chanthaburi provinces.

About 4,000 American soldiers, 4,000 Thai soldiers, and 10,000 from 20 other nations will participate in the two-week Cobra Gold exercise that will kick off on Feb 9 at the Armed Forces Academies Preparatory School in Nakhon Nayok.