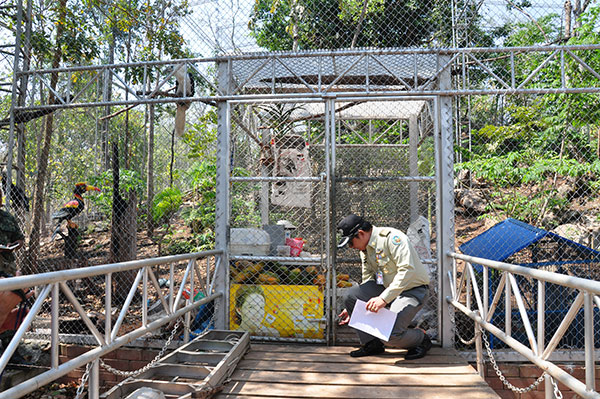 A team of 100 forest officials, soldiers and policemen executed a search warrant at Wat Pa Luangta Maha Bua Yannasampanno in Sai Yok district after receiving complaints from tourists that the place had large numbers of protected wild animals and were trading tigers illegally.

About 20 officials had shown up Monday to inspect the temple and discovered several species of protected birds - including hornbills and red-whiskered bulbuls - locked in cages. They also found two foxes in cages in front of the temple.

But their survey was cut short by abbot Phra Vissuthisaradhera, forcing the team to return today with a search warrant.

Monks and staff at the temple remained uncooperative Tuesday, refusing to unlock cages that housed the wild birds. The team had to use cutting tools to remove the birds. They also found the foxes had gone missing from the cages. Athipat Srimanee, the temple caretaker, claimed he did not know how and when the foxes disappeared.

Chartchai Sripaew, head of the Wildlife Crime Suppression Office 1 said, the temple did not have permits to raise the seized birds and the animals would be sent to Khao Prathap Chang Wildlife Research and Breeding Centre in Ratchaburi.

The temple, however, does have permission from the Department of National Parks, Wildlife and Plant Conservation to operate a zoo on the premises.

Mr Chartchai said Tuesday's warrant expired at 6pm and officials would come back tomorrow with another search warrant to check claims of illegal tiger trading and further investigate the disappearance of the foxes.

The Royal Forest Department several years ago seized about 100 tigers as evidence in an earlier protected-species case, but the tigers have remained on temple grounds since authorities had no place to hold them.