A freight car ploughed into buffers at Hua Lamphong railway station damaging the track at one platform yesterday. No one was injured. 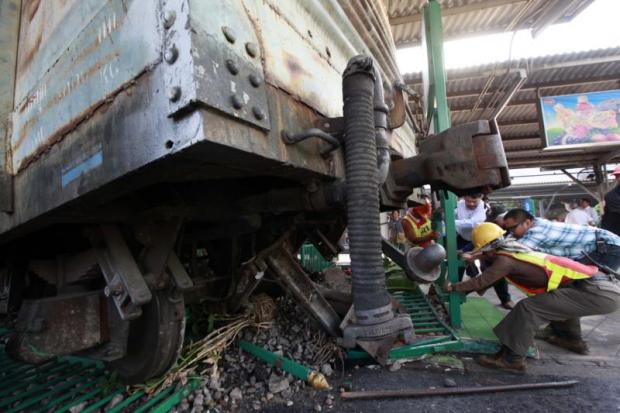 Workers try to salvage a freight car which ploughed into a track buffer at Hua Lamphong railway station yesterday morning. No one was injured and damage is being assessed. Apichart Jinakul

The incident occurred around 8am when an empty passenger carriage came loose from a train and crashed into a parked freight car, propelling it into a track buffer at the No. 12 platform.

The passenger carriage was being pulled into service at the time.

A faulty coupling was blamed for setting the passenger carriage loose, said Pornsuthi Thongsard, chief of the State Railway of Thailand office in charge of operation safety.

He said the incident damaged the tracks and the platform roof above. The freight car which jumped the tracks was salvaged and pulled away.

The freight car was used to transport train spare parts and equipment for rail track repair. Mr Pornsuthi said damage was being assessed.

Wuthichart Kalyanamitra, the newly-appointed governor of the State Railway of Thailand (SRT), denied the incident was a deliberate act to test his leadership in the new post. He insisted it was an accident.

Mr Wuthichart said he planned to meet SRT executives and staff soon to discuss ways to improve train services and build public confidence in the SRT.

Among the priorities were solving the frequent derailments, increase train safety and punctuality, and improve cleanliness of the toilets on trains.

Mr Wuthichart, who previously served as Transport Co president, said he expected to see a significant improvement in three to six months.

The Thailand Development Research Institute last year recommended the government overhaul the structure of rail business and restructure the massive debts of the SRT.