US: Alliance depends on democracy

The United States will not fully reactivate its military alliance with Thailand as long as the junta-controlled country refuses to restore democracy, a US diplomat warned Thursday.

"There has to be a full restoration both of the institutions of governance and justice as well as the full restoration of a duly democratically elected civilian government," the senior State Department official told journalists. 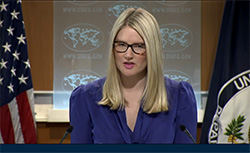 It follows a recent visit by Daniel Russel, the most-senior US official to travel to the kingdom since Thai generals imposed martial law and took over in a coup last May.

The United States strongly condemned the coup at the time, with chief diplomat John Kerry calling for a return to civilian rule via democratic elections.

Washington and Bangkok maintain a military alliance dating to the Cold War and the fight against communism in Southeast Asia, notably during the Vietnam War.

US and Thai armed forces remain tightly linked, but the United States cancelled joint military exercises immediately after the coup and suspended a small part of its military assistance to Thailand. The US, however, will put forth a smaller-than-normal contingent for the upcoming Cobra Gold multinational war games.

"Thailand is a valued friend and ally. We have a longstanding history of strong cooperation. We will continue cooperation on issues that matter to the security and well-being of our country and theirs as well," State Department deputy spokeswoman Marie Harf reiterated later in the day. "But we have continued to urge the government to take necessary steps to fully succeed in its transition to democracy. We believe this needs to happen as quickly as possible, and we'll keep pressing that with them."