Defence Minister Prawit Wongsuwon leads his Chinese counterpart Chang Wanquan to view a guard of honour at the Defence Ministry during his visit to Thailand on Feb 6. (Photo by Apichart Jinakul) 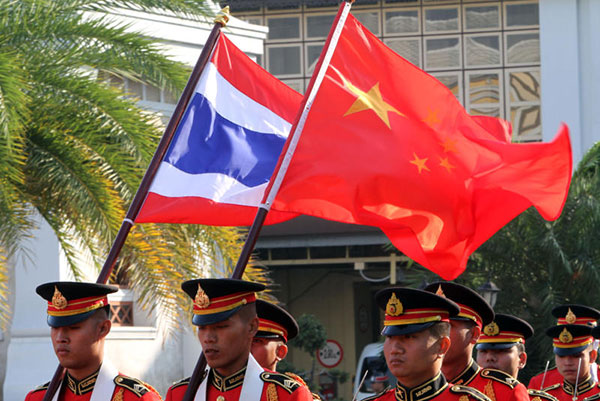 A welcoming ceremony is held at the Defence Ministry for China's Defence Miniser Chang Wanquan. (Photo by Apichart Jinakul)

Beginning a Feb 5-7 visit to Bangkok, China's Defence Minister Chang Wanquan also took pains to stress that Beijing has no plans to "interfere" with Thailand's military regime, something the Thai government feels its long-time ally, the United States, did last month during the visit of a high-ranking diplomat.

"China will not intervene in Thailand's politics but will give political support and help maintain relationships at all levels," Defence Minister Prawit Wongsuwon told reporters. "China has agreed to help Thailand increase protection of its own country and advise on technology to increase Thailand's national security."

China also pledged to boost defence cooperation in research and technology and offered to give special prices for procurement of submarines, tanks and other weapons.

Prior to meeting Gen Prawit, the Chinese defence minister called on Prime Minister Prayut Chan-o-cha at Government House. During their meeting, Mr Chang expressed his support for the two countries' strengthening of security cooperation, especially in combatting terrorism, according to government spokesman Yongyuth Mayalarp.

Both government and defence spokespeople noted that Thailand used both of Friday's meetings to explain the political situation in the country and claimed China agreed that it both understood, and pledged not to "interfere".

Col Khongcheep quoted Mr Chang as saying he understood Thailand's politics that are complicated and had praised the military for its role in controlling the situation.

China's warmer relations contrast with currently strained ties between Thailand and its ally of more than 100 years, the US. Washington cut off military aid and cancelled a joint exercise after the May 22 coup and has consistently pressured the National Council for Peace and Order to restore elections and democracy.

Relations worsened last month during a visit by a State Department assistant secretary who called for the lifting of martial law and criticised the impeachment of former prime minister Yingluck Shinawatra, setting off days of criticism from top government officials about US "interference" in Thailand's "internal matters."

The US kept up the pressure Thursday, with a senior diplomat in Washington saying the US would not fully reactivate its military alliance with Thailand until the junta restores "both of the institutions of governance and justice as well as the full restoration of a duly democratically elected civilian government".

The US, Thailand and five other countries begin a scaled-down Cobra Gold multinational exercise in Thailand Feb 9. The US pared by its navy forces by 20% this year, even as China goes from observer status to sending six soldiers to participate in humanitarian civic action training.