The Bangkok Metropolitan Administration has declared a building in the Siam Commercial Bank complex in Ratchadaphisek Road off limits after a fatal blaze overnight which remains a mystery. 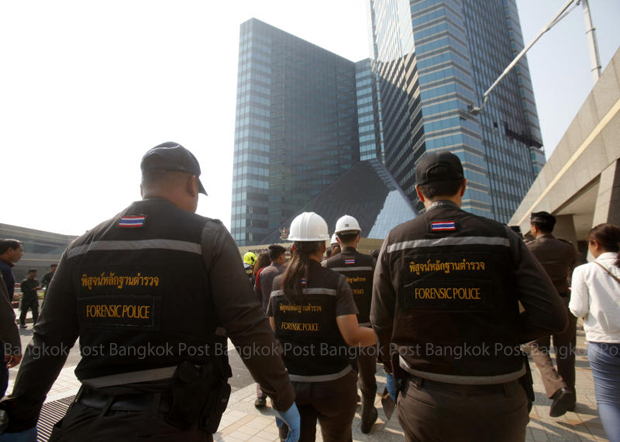 Forensic police join authorities on Sunday to find the cause of a blaze at a buidling at the Siam Commercial Bank head office. (Photo by Pattarapong Chatpattarasill)

Chatuchak acting district chief Yodkwan Junnapiya said the entire Zone A of the 34-storey building was temporarily closed to the public. Only officials and engineers are allowed in to inspect the structure, even though they are confident that other floors are safe for use.

The fire began at 9.45pm on Saturday on the 10th floor of the building at SCB Park on Ratchadaphisek road. The floor is used to keep documents about mortgage loans. Firefighters, assisted by aerial trucks, took about two hours to bring the blaze under control and put it out.

The 9th and 11th floors of the building in Zone A are partially damaged. 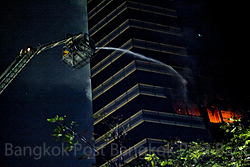 The blaze killed Decha Duangchana, a 35-year-old firefighter volunteer for the Bangkok Fire and Rescue Department based in Lak Si district, as he and other fighters tried to contain the fire. He was believed to have died of suffocation due to lack of oxygen.

Police from the Metropolitan Police Bureau, Forensic Science Office, Crime Suppression Division and Phahon Yothin station, forensic experts, Chatuchak district officials, Bangkok Fire and Rescue Department, and authorities of the Public Works and Town and Planning Department of the Interior Ministry inspected the fire scene on Sunday to try to establish the cause of the blaze.

They collected evidence, checked the footage of closed circuit cameras and interrogated more than 30 witnesses, including firefighters and security guards.