Cobra Gold opens at 'challenging' time for US, Thailand

Thai soldiers carry national flags as they participate in the opening ceremony for Cobra Gold at a military academy in Nakhon Nayok province Feb 9. The United States said on Monday its relationship with long-time ally Thailand was going through a "challenging" period as the two sides began a major military exercise, scaled down over Washington's concerns about the junta leadership. (Reuters photo)

NAKHON NAYOK — The United States said on Monday its relationship with long-time ally Thailand was going through a "challenging" period as the two sides began a major military exercise, scaled down over Washington's concerns about the military leadership.

Cobra Gold, the largest military exercise in the Asia-Pacific, has been held annually in Thailand for more than three decades, but the United States scaled the drill back this year after sanctioning Bangkok for last year's coup.

"We can't deny that this period is a challenging one and has necessitated a modified Cobra Gold as Thailand manages its return to democracy," US charge d'affaires W. Patrick Murphy said in a speech at the opening ceremony for Cobra Gold at the Armed Forces Academies Preparatory School in Nakhon Nayok.

The Thai army took control last May saying it needed to restore order after months of political unrest that killed nearly 30 people. The United States responded by freezing $4.7 million of security-related aid and cancelling some security cooperation. 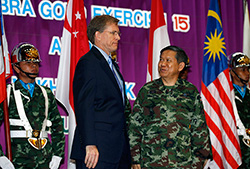 Comments by a visiting US envoy last month, including that Thailand immediately lift martial law which has been in place since May, further strained ties. Senior Thai ministers responded by telling the US not to meddle in Thailand's political affairs.

Washington has sent 3,600 troops for this year's exercise, down from 4,300 last year, the US Embassy in Bangkok said in an e-mailed statement.

Unlike previous years, there will be no amphibious-landing drills during this year's Cobra Gold war games. There will be live-fire exercises near Ban Chan Khlem village in Chanthaburi province and humanitarian civic-action training and non-combatant evacuation drills.

More than 10,000 troops from 24 countries are taking part in the multinational exercise including Japan, South Korea and Indonesia. China and India will participate in humanitarian exercises, said Gen Wuttinun.

The exercise comes as Thailand seeks to counterbalance its ties with Washington by cozying up to regional superpower China which says it supports the Thai military government.

Ian Storey, senior fellow at the Institute of Southeast Asian Studies in Singapore specializing in Asian security issues, said that cancelling the exercise could have had major security implications in the region.

"Cancelling them would have created an opportunity for Beijing to strengthen its strategic ties to Bangkok, and that is clearly something that is not in Washington's interests in the context of US- China competition in Southeast Asia," he said.