Satriwitthaya 2 students protest against the return of the school director on Feb 11. (Photo by Pattanapong Hirunard)

About 300 students, parents and alumni of Satriwitthaya 2 School flexed their muscle on Wednesday, protesting against the planned return of the school's director, who was earlier transferred to an inactive post pending an inquiry into a controversial fundraising campaign for the school's marching band. 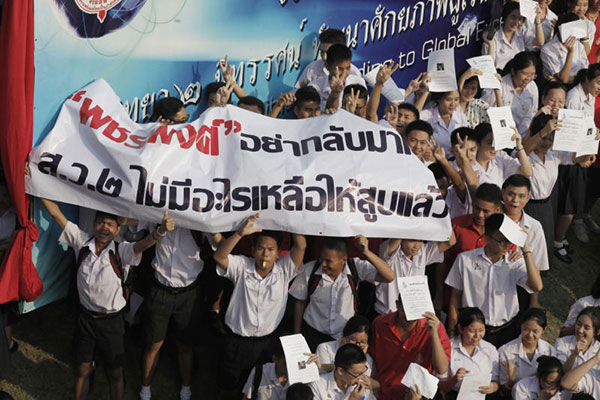 Students hold up a cloth banner with the message ''Pacharapong, don't return. Satriwitthaya 2 School has nothing left (for you) to suck anymore.'' (Photo by Pattanapong Hirunard)

Parents joining in the protest on Wednesday claimed Mr Pacharapong had sought approval from the education office to return to the school. This drew strong opposition  from students, alumni and parents -  who felt the school director showed poor governance in administering the school, and said his past actions created internal rifts.

However, another group of alumni and parents also gathered at the school in a show of support for Mr Pacharapong’s reinstatement.

Chokechai police and soldiers were sent to the school to ensure peace and order.

The marching band, Max Percussion Theatre, had been the subject of heated debate since it pulled a publicity stunt asking Mr Tan, owner of Ichitan Group Co Ltd, for a 3.1-million-baht donation to travel to a competition in the Netherlands from March 25-29. They won top prize in “Marching World Class” --  but were the only team in the category.

The band attracted harsh criticism for the way in which it “begged” the businessman for the money, then appealed for more cash from the private sector to travel to a separate competition in America. 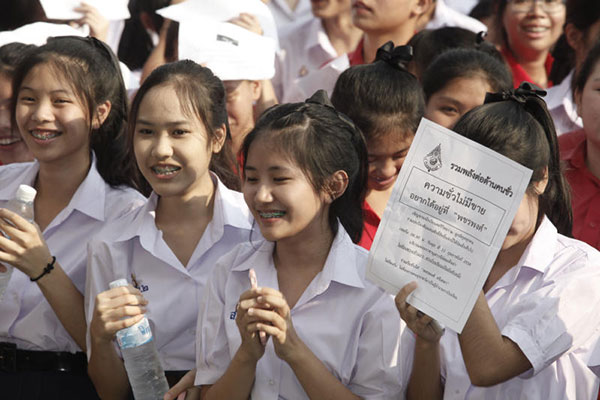 A student holds a leaflet attacking the school's director as she and other protesters oppose the return of Pacharapong Trithepha   on Feb 11.  (Photo by Pattanapong Hirunard)