Gov't urges teens to have dinner, not sex, for Valentine's Day
Thailand
General

Gov't urges teens to have dinner, not sex, for Valentine's Day

A young student couple gets amourous in a Bangkok park. Instead of sexual activity, government officials are asking teenagers to share a nice dinner this Valentine's Day and then to go home. (Bangkok Post photo)

The government has launched a campaign asking teenagers to restrict their amorous activities on Valentine's Day, officials said Thursday.

Instead of sexual activity, officials are asking teenagers to share a nice dinner and then to go home. "Have a special meal, but not sex" is the slogan of a campaign by the Moral Promotion Centre to raise awareness of the dangers of pregnancy and sexually transmitted diseases.

"We are trying to stop our teenagers from engaging in less-than-moral activities which leads to complications," an MPC spokeswoman told the German Press Agency. "We are asking our teenagers to not have any secret plans." 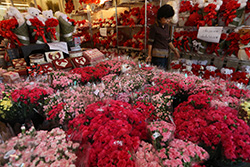 A woman arranges flowers for sale at the Pak Khlong Talat flower market. After years of delay, the government is planning to set up the National Savings Fund to provide a retirement safety net for informal workers including vendors. (Photo by Jiraporn Kuhakan)

Thailand has some of the world's highest teenage pregnancy rates, with 54 out of 1,000 girls between the ages of 15 and 19 giving birth each year, according to Public Health Ministry statistics. Media surveys have shown teenagers in Thailand pick Valentine's Day as the perfect day to lose their virginity, dpa said.

"If kids really love each other, it's better for them to go and free birds and fish or go to the temple," Pirapong Saicheua, an official of the city authority, told Reuters.

Freeing caged birds is an auspicious Buddhist ritual that believers in Asia see as a way of enhancing their merit, or karma. "Better to put your minds at ease," Mr Pirapong added. "Don't obsess over something inappropriate for your age."

In addition to unwanted pregnancy, public health officials also worry about rising rates of HIV infections among the young. Thailand faces HIV-infection rates among gays comparable to those in Africa's AIDS hotspots. 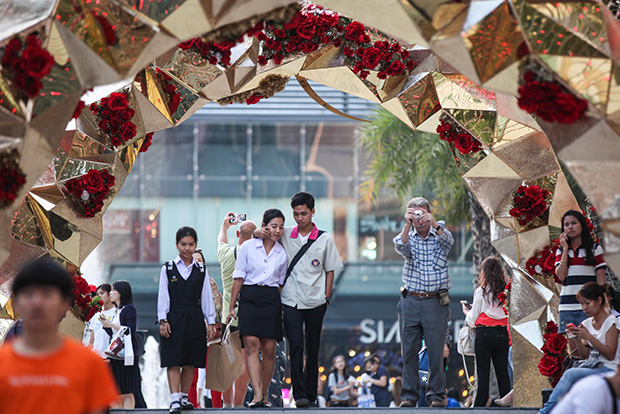 A young couple walks through the flower-adorned archway at Bangkok’s Siam Paragon mall. The government has launched a campaign asking teenagers to restrict their amorous activities on Valentine's Day. (Photo by Nattapol Lovakij)

The MPC has blamed a rise in the trend on the increased use of social media and dating applications. And Bangkok youths young say there is little chance of moral guardians persuading them to rein in sexual activity.

"I think sex can't be prohibited," said Khemaphat Santong, a 21-year-old student at the city's Chulalongkorn University. "I mean, in some public places, yes, but stopping someone from doing it entirely is impossible."