A bride and groom lie in a pink coffin in a wedding ceremony organised by Wat Ta Kien in Bang Kruay district in Nonthaburi on Saturday. (Photo by Pattarapong Chatpattarasill)

Love was in the air and in a few other strange places on Valentine's Day across Thailand.

While most couples flocked to the Bangkok district of Bang Rak — literally meaning the Place of Love — to tie the knot, 10 pairs opted for an unconventional ceremony at Wat Ta Kien in Bang Kruay district in Nonthaburi on Saturday.

The temple organised the unusual wedding ceremony. Couples made offerings to the monks and lay in a pink coffin covered with a white sheet. The monks then chanted as if the pair were dead before ending the prayers by blessing them for a new life. 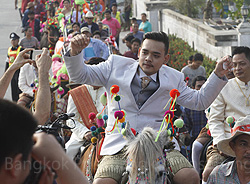 A groom on horseback rides to his wedding ceremony on Saturday at Wat Ta Kien in Nonthaburi's Bang Kruay district. (Photo by Pattarapong Chatpattarasill)

Abbot Phra Kru Samu Sa-ngob Kittkayo said the ceremony meant the bride and groom would start their life anew after coming out of the coffin with all bad luck banished.

The temple held the event for the first time last year, when Valentine's Day fell on the same day as Makha Bucha Day, so the couples could marry and have a religious ceremony on the same day.

The abbot said he originally had no plan to repeat the event as Makha Bucha is in March this year, but that many brides and grooms had contacted the temple asking for a repeat performance.

He also cautioned that the ceremony was not really meant to dispel bad luck, and could serve as a reminder for couples to live with the reality that nothing lasted forever as death would come some day.

Among the couples at the temple were two women, Pichaya Thaenphim and Pattaranaya Kamploy, who have been together for more than three years.

They said they decided to come to the ceremony after contacting the temple, which allowed them to marry without showing discrimination, Post Today and Thai Rath online reported.