Trouble swells on the Mekong

The fish patterns are changing, and Loei fishermen say they haven't seen big ones for 16 years. (Photos by Paritta Wangkiat)

When construction of the Xayaburi dam's second stage began late last month, fishermen in villages along the Mekong River grew concerned that unpredictable man-made tides will further decimate fish populations and force the fishermen out of work.

In the second phase, construction is being shifted from the west side of the river, on Laos' Xayaburi province side, to the east side, in Luang Prabang province. As part of the process, coffer dams — temporary enclosures built within a body of water to create a dry work environment — are being built in the Mekong River for the first time since the dam's construction began in 2012, to shift water flow.

The completion of the second phase is scheduled in June, and over 90% of electricity produced by the 1,285-megawatt dam — which could be complete as soon as 2019, officials say — will be exported to Thailand.

But as the work continues, sudden changes in the Mekong River's tides are stoking fears among villagers that their livelihoods will be affected.

All their lives, they have watched the Mekong's water level rise gradually from May to October, and recede from November to April. But now, the river swells and shrinks without warning.

According to a real-time monitoring website set up by the Mekong River Commission, the water level abruptly rose by 1m and then fell between Jan 13-16, despite no recent reports of rainfall.

The villagers, especially fishermen in Chiang Khan, about 160km downstream from the Xayaburi dam, have faced the toughest time in the last five years — their Mekong fish harvest has declined by half, they say.

Prayun Sean-ea, 56, used to catch several kilogrammes of fish within a couple of hours when he was young. But now it takes him all night to catch a much smaller amount.

He and local fishermen suspected the declining catches have been caused by unusual seasonal water flow and fluctuations, caused partly by the dams' water discharge gates.

"We can't predict the tide [in accordance with the moon] like before," said Vachira Nanraprom, 47, a local fisherman.

Fisherman Channarong Wongla, 44, recalled that, in his childhood, the dry river bed usually wouldn't emerge until March. But only one week after the second phase of construction started on Jan 26, the fishermen witnessed a different pattern.

The water level lowered quickly only one week after the launch of the second phase. High tide in the previous week was followed by the emergence of a sandy riverbed.

It has not been officially confirmed that the dam construction is causing the water fluctuations on the Mekong. But Mr Channarong said the villagers are recording the changes to compare the water level before and after the dam's construction.

This is not the first time the river has experienced unusual tides. The Chinese government has been building a series of large dams on the Upper Mekong since the 1990s.

Seven megadams have been built, and at least 20 more are under construction or being planned.

Despite the water fluctuations, Pianporn Deetes, coordinator of International Rivers in Thailand, couldn't confirm the irregularity in the Mekong River in the past several years has been caused by the Chinese dams because China doesn't disclose information about its water operations.

"But we can tell the river has changed since work on the dams began," said Ms Pianporn, adding the governments of the countries involved have never raised the issue in a concerted way, leaving villagers to bear the consequences.

Viraphonh Viravong, the Laos Deputy Minister of Energy and Mines, said in the Vientiane Times that river flow will not be affected, except for a few hours during the initial closing of the Xayaburi dam, while workers build a system that lets fish pass up and downstream.

But his remarks have not put villagers along the river in Thailand at ease.

"We've experienced unusual seasonal water flows since the launch of Chinese dams upstream," said Mr Channarong. He and other villagers suspect that, once completed in 2019, the Xayaburi dam will affect their livelihoods even more.

The drastic reduction in fish populations has forced fishermen to travel farther afield, raising their fuel costs, and hundreds of fishermen have left the trade, shrinking from around 800 in Chiang Khan eight years ago to about 80 today.

Fishermen aren't the only ones affected. During the Songkran festival last year, the water rose overnight and flooded the set of an annual festival in Pak Chom. The day before, it was sitting on dry sand.

"We have to live with the changes. We can't ask that we get our normal life back," said Thanya Maophawong, 52, a Pak Chom resident. 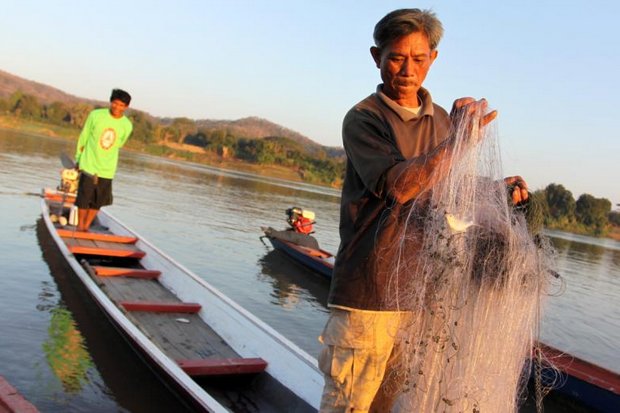