Four people arrested on Saturday in Bangkok's Pathumwan area for protesting against the coup were released on bail yesterday morning, police said. 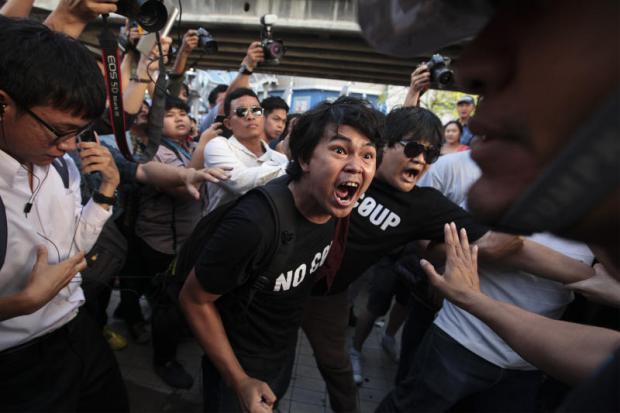 Anti-coup students react as police officers lead them away for protesting in front of the Bangkok Art & Culture Centre on Saturday. Patipat Janthong

Calling themselves the Phonlamuang To Klap [Resisting Citizens] group, the men organised a mock election to commemorate the poll on Feb 2 last year, which was nullified by the Constitution Court.

The men were arrested and charged with violating the National Council for Peace and Order's seventh order, which bans political gatherings of more than five people. Violation of the order is punishable by a one-year jail term, a 20,000-baht fine or both.

Pol Col Chakkarin Panthong, a Pathumwan police investigator, said the suspects denied the charges and were set free on bail.

All but Mr Siravich were released on 20,000-baht bail. Mr Siravich, released on 40,000-baht bail, was reported to have staged a similar anti-coup rally before. Police say he broke an agreement he signed with the authorities promising not to engage in the activity again.

The men were told not to hold any more political gatherings or their bail would be revoked.

The suspects will be tried in the Military Court under martial law, Pol Col Chakkarin said. They have to report to Pathumwan police on March 16.