"The government is now in the process of studying the requested action against the monk. Action will be carried out step by step," Gen Prayut said. 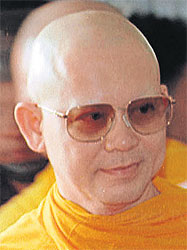 Gen Prayut said the government is now waiting for the National Office of Buddhism (NOB) to submit a formal request regarding exactly what course of action the government should consider taking in response to the NRC's move.

He added: "The press always asks me to rush this and that. Why don't you ask people in past governments why they didn't take action after 1999?"

NRC member Paibul Nititawan turned the spotlight on the controversial monk when he said on Wednesday that the NRC committee on religious affairs found that Phra Dhammachayo had violated the Buddhist monks' code of conduct and he should have been defrocked more than a decade ago.

He cited a letter, dated April 26, 1999, and written by the late supreme patriarch, His Holiness Somdet Phra Nyanasamvara, which listed two infringements: It said Phra Dhammachayo distorted Buddhist doctrines, resulting in conflict among the monks. And it said he was reluctant to transfer to Wat Phra Dhammakaya 1,500 rai of land donated to him by his followers.

The letter, which was sent to the Supreme Sangha Council (SSC), suggested Phra Dhammachayo be defrocked, but the SSC declined to do so.

In response to the NRC's findings, NOB spokesman Somchai Surachatree said yesterday it would have to study the late supreme patriarch's letter again because in 1999 the now-defunct department of religious affairs handled the matter.

But he said it was unlikely Phra Dhammachayo had violated the code of conduct. Mr Somchai said a preliminary check by the NOB showed the monk had already returned the land, valued at 900 million baht, to the temple.

Based on this information, Phra Dhammachayo is still allowed to serve as abbot, at least for now, he said.

However, in light of the fresh calls for an inquiry, Mr Somchai said the NOB will discuss the case in its regular meeting today and will likely set up a committee consisting of legal experts — both senior monks and laymen — to interpret the late supreme patriarch's letter again.

Meanwhile, the communications office at Wat Phra Dhammakaya released a short statement insisting the matter has already been dealt with and is over. The statement was signed by Phra Sanitwong Wutthiwangso, director of the office.

Another related statement was posted on Facebook explaining that Phra Dhammachayo's alleged violation of the Buddhist monks' code of conduct ended in 2006 and came as a result of a misunderstanding caused by "insufficient information". When the SSC was later provided with complete information, it suggested corrective action, the wat said.

Later that year, the SSC acknowledged that Phra Dhammachayo should be reinstated. He even received a promotion on Dec 5, 2011, to a higher rank, the temple's statement said.

But Mr Paibul yesterday stood firm in his stance that the monk must be defrocked, saying the SSC owes the public a clear explanation as to why no action has ever been taken against him.

Additionally, the NRC plans to invite the Anti-Money Laundering Office and the Department of Special Investigation in for questioning regarding their past roles in investigating separate allegations that Phra Dhammachayo colluded with suspects in a 12-billion-baht Klongchan Credit Union Co-operative embezzlement scandal.

The monk is alleged to have received millions in stolen cash in the form of donations.