Police rush to the Showgirls bar in Pattaya after being alerted about an assault involving three foreign tourists and security guards in the early hours of March 4. (Bangkok Post photo)

Three drunk foreign men were assaulted by bouncers at a Pattaya nightclub after arguing with guests and allegedly attacking the Australian owner early today.

The men between 25 and 30 years old, assumed to be tourists, sustained bruises after the brawl at the Showgirls go-go bar on Soi LK Metro in tambon Nong Phreu in Chon Buri's Bang Lamung district at about 3.30am Wednesday, said police. Rescue workers provided first aid to the injured, who were still under the influence of alcohol. 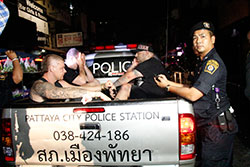 Three foreign tourists injured after being assaulted by security guards at a bar in Pattaya are taken to a police station for questioning. (Bangkok Post photo)

The incident created chaos among visitors at the nightspot and other nearby bars in the entertainment zone frequented mostly by expats. Broken glasses and beer bottles were found scattered across the area.

Shortly later, Ronald James Kingsnorth, 71, the Australian owner of the bar, tried to intervene, but one of the three men elbowed him in the face. The guards immediately assaulted the three men.

Pol Lt Col Kowit Sawadmonkhol, suppression chief at Pattaya police station, who rushed to the scene after being alerted, said the incident had badly tarnished the tourism image of Pattaya. All involved in the assault, including the bar owner, were taken to the police station for further questioning before legal action is taken.

Police had earlier warned bar owners to close at midnight for the start of Makha Bucha Day, but Showgirls was still open far past the legal 2am closing time, said Pol Lt Col Kowit.

Bar-bouncer attacks against foreign tourists has been a continual problem in Pattaya, with authorities adopting a zero-tolerance response to such attacks.

In January, a Russian tourist was beaten senseless at a North Pattaya beer bar by a bouncer who mistakenly thought he was running out on the tab. He was arrested.

In October a Walking Street go-go bar was closed for 30 days after bouncers assaulted a Kuwaiti military officer and, in June the popular Lucifer disco also was closed for a month after two Israelis were put in the hospital by bouncers.