Two Thai women who have dedicated their lives to defending human rights have pledged to continue fighting for justice as the world marks International Women’s Day today.

Chutima Sidasathian, 34, a journalist at the Phuketwan news website, and Pornpen Kongkachornkiet, 45, director of the Cross Cultural Foundation, both vowed to remain committed to activism. 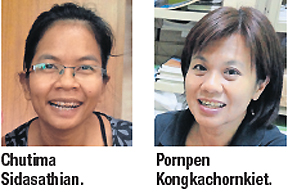 Chutima published a story on Phuketwan.com in 2013 linking the Thai Navy to the trafficking of Rohingya boat people. She was subsequently charged with criminal defamation.

Ms Pornpen presented a report detailing military torture against Malay Muslims in Thailand’s deep South to the United Nations forum in Geneva last May. She was hit with an official complaint from the military on returning home.

Chutima is still facing charges, but Ms Pornpen was informed by police in December that the case against her had been dropped. Police did not elaborate and the military has remained silent on the issue.

The pair said women are treated equally in some corners of “this male-dominated and biased world”, but all women must use their intelligence and integrity to boost the rights of those who don’t enjoy such freedoms.

Chutima, a Nakhon Ratchasima native, has been working for Phuketwan since 2008. She was previously a waitress, but enrolled at Ramkhamhaeng University’s Faculty of Political Sciences to further her education.

She has no formal journalism qualifications, but said she has experience of interacting with people from all walks of life. She tried to get a job at the Phuket Post before joining Alan Morison, a veteran journalist from Australia, at Phuketwan.

Her story is not a rag-to-riches fairytale, but she has committed herself to trying to improve the fate of vulnerable people such as the Rohingya.

As Thailand struggles to upgrade from the lowest Tier 3 rating in the US report on trafficking in persons, the authorities have recently contacted Phuketwan, offering to withdraw the lawsuit if the journalists apologise.

In January, Chutima came to Bangkok to lodge a complaint with the prime minister at Government House, asking him to order the navy to drop the case since Phuketwan had simply been doing its journalistic duty.

“It’s just frustrating and tiring sometimes, but my boss and I never give up,” said Chutima.

But she said she is optimistic that Thai society has progressed to the point where it recognises women who persevere. “We must not underestimate ourselves,” she said.

Ms Pornpen agreed. “Thai women are being provided with both opportunities and challenges,” she said.

“Women are well-adapted to difficult situations. We have to prove that we can deliver professionally, beyond just having nice personalities.”