Deported German beggar back in Asean

A 30-year-old German man who was found drinking and partying after begging for money on Bangkok and Pattaya streets is now chancing his luck in the neighbouring Philippines, following his deportation from Thailand last year.

Benjamin Holst announced his return to the region on his Facebook page last week, saying he was now in Angeles City in the Philppines.

He posted photos of Angeles City and of bar girls there.

Mr Holst, who suffers from macrodystrophia lipomatosa, a rare form of localised gigantism, was previously last seen in Denmark in November after Thai authorities deported him.

While in Thailand, the German claimed that his passport and money were stolen and he drew sympathy from many people due to his swollen leg.

A German foundation later provided him with a hotel room while he waited for a new passport, but he sneaked away and then resurfaced in Pattaya before being deported. 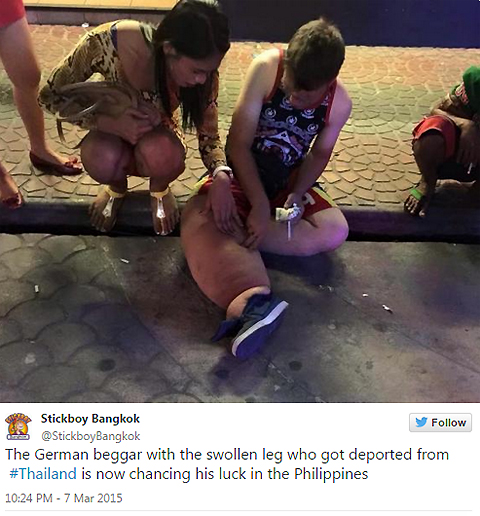