Authorities are conducting forest surveys to find new homes suitable for elephants to solve the problem of over population of diminishing existing habitats.

The National Parks, Wildlife and Plant Conservation Department of the Natural Resources and Environment Ministry are carrying out the project.

Deputy permanent-secretary for natural resources and the environment Suphot Tovichakchaikul said on Tuesday the ministry was concerned about a rise in wild elephant numbers in some forests, which was leading to the overpopulation problem.

Mr Suphot said overpopulation has affected the environment and food supplies in some forests. As a result, elephants leave the jungles for nearby residential areas in search of food, resulting in confrontations between elephants and humans.

The source said a wild elephant's proper food foraging range is an area about 8 sq km in size. Mr Suphot said elephant populations are growing by 10% each year in national parks across the country.

Authorities had to speed up finding new forest homes for wild elephants in forests with already large populations, especially in the four forest national parks. Once the studies are completed, those elephants would be moved to more spacious forests. However, Mr Suphot admitted the moving process would not be easy and other measures to manage elephant overpopulation would be considered.

The source said officials should look at the effects of elephant relocation, as elephants might not fit in well in new surroundings. However, he said moving the elephants is a must as overpopulation is harming the environment. 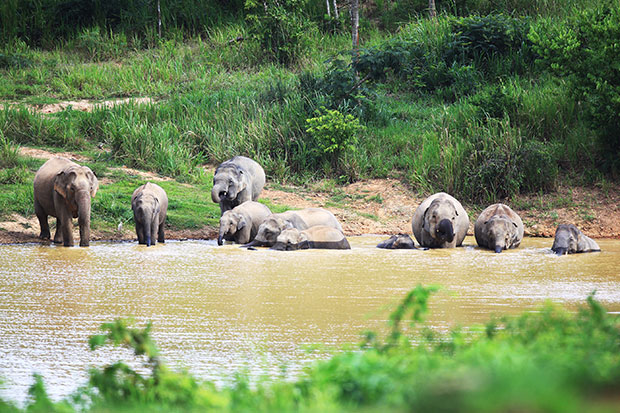