An unreachable website shows information that its content is not suitable and been suspended by the Information and Telecommunication Technology Ministry.

However, a huge portion of them remain open due to the police's lack of authority in gaining access to them when the servers are located overseas.

Pol Maj Prakrom Varunprabha, a police inspector with TCSD's Sub Division 1, who is on a special assignment to curb lese majeste acts on the internet, said the TCSD issued orders to shut down 510 URLs between Jan 5 and Tuesday for violating the lese majeste law.

URL is the generic term for all types of names and addresses that refer to objects on the World Wide Web. 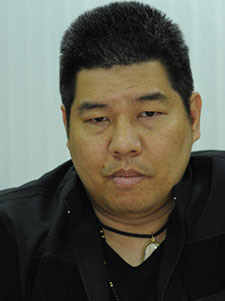 After being shut, some HTTP-type URLs have also been re-opened with the help of some technology while those HTTPS-type URLs that cannot be closed are mostly on Facebook or YouTube which normally take a much longer time to deal with.

Police first have to seek permission from the court and translate the court's permission document into English before submitting it to the concerned websites.

The URLs were used for the same purpose of defaming the monarchy, the heir to the throne and the regent, which is against Section 112 of the Criminal Code, said Pol Maj Prakrom.

Some of the most common forms of lese majeste materials found on the internet are defamatory messages, doctored pictures, and fake audio clips designed to mislead and confuse the public, he said.

"Previously, when governments were led by political parties, Facebook and YouTube were used widely to gain political benefits. That was why they didn't want to do anything with [lese majeste movements on these online media]. Instead, those governments pretended they wanted to ensure freedom of expression," he said.

Aside from lese majeste acts, crimes including fraud, defamation, and other internet-based criminal acts were more rampant at that time, said Pol Maj Prakrom.

In tracking lese majeste offenders who use internet servers registered in Thailand, police first have to check for their IP addresses by working together with the owners of the websites or the internet providers.

After that police will seek permission to search locations where they think the suspects may be or where there might be clues leading to their arrest.

But the process becomes more complicated when it comes to servers that are registered overseas as it's more difficult to seek co-operation from the parties concerned, said Pol Maj Prakrom.

A special technique is needed to obtain the IP address used by the suspect before the legal process can actually begin, he said.

However, Pol Maj Prakrom declined to elaborate on what the technique is.

And unlike tracking domestic servers, tracing servers overseas also requires a process of seeking co-operation from authorities in those countries where the servers are found, he said.

It is not easy to probe whether the suspects really are the real culprits, so police will usually seek witnesses and evidence from where the suspects committed the crime.

Given these problems, the best way to deal with online lese majeste acts is to use a special device to screen or search for keywords of suspected content uploaded onto the internet, he said.

This type of device has been used overseas. In the US, for instance, the device is used to screen for possible acts that may endanger international security or lead to internet fraud.

The use of this technology should never be regarded as a form of violating individual rights or freedom, given the fact it is also used widely in countries like the US, Britain, France, Taiwan, Malaysia and Singapore, he said.

"Not only does this device help curb lese majeste law violations here, but it also helps suppress other types of online crimes such as sales of weapons and drugs and prostitution," he said.

Not all suspects have been prosecuted as police tend to base their decisions mainly on the motive of the crime. Some may be warned to stop if they are found to have forwarded lese majeste materials online out of simply wanting notoriety in cyberspace.

Otherwise, lese majeste offenders can face between three and 15 years in jail, plus a maximum additional prison sentence of five years or a maximum fine of 100,000 baht for violating the computer crime law.