Nattatida Meewangpla was abducted from her home on March 11 by the 1st Army, which then either lost her in its vast interrogation system or lied about taking her. (Photos by Pornprom Satrabhaya)

Police have charged Nattatida Meewangpla, a key witness in the 2010 Wat Pathum Wanaram killings case, with being involved in bomb attacks in the capital.

The National Council for Peace and Order (NCPO) said soldiers had detained her and handed her over to police Tuesday.

Prime Minister Prayut Chan-o-cha said the military did not detain Ms Nattatida, but they only "invited" Ms Nattatida for talks. The military handed her over to police for investigation after they found she was linked to the court grenade attack, Gen Prayut said.

Ms Nattatida was among three more suspects who police  announced had been arrested Tuesday in connection with the Criminal Court grenade attack on March 7 and twin bomb blasts next to Siam Paragon on Feb 1.

Ms Nattatida, a volunteer nurse and a key witness in the shootings at Wat Pathum Wanaram on May 19, 2010 which claimed the lives of six people, had been reported missing from her home in Samut Prakan since March 11. A witness saw two soldiers take her away.

On Monday, NCPO spokesman Col Winthai Suwaree strongly denied any military involvement in Ms Nattatida's disappearance and rejected allegations on social media that the volunteer nurse caught up in the 2010 military crackdown had been seized by security forces.

Lt Gen Kampanart said his peacekeeping force was unaware of the detention of Ms Nattatida until it was informed by the military team that was probing the bomb blasts.

He said people brought in by the military for questioning were released if found innocent, but turned over to police if further investigation was warranted.

Apart from Ms Nattatida, the military Tuesday also handed Nares Intarasopha and Wassana Busdee over to the Metropolitan Police Bureau for questioning about the court grenade attack.

Police have also charged Ms Nattatida and Ms Wassana with hiring others to kill people.

Metropolitan Police Division 6 chief Pol Maj Gen Chayaphon Chatchaidech revealed authorities uncovered a plot for bomb attacks in five locations in Bangkok. Those involved in the plot are the same group involved in the March 7 court grenade attack, he said.

The targets for the planned attacks were the 11th Infantry Regiment, Lumpini Park, the entrance to the MRT's Chatuchak station, the Criminal Court and the Siam Kempinski Hotel car park, Pol Maj Gen Chapaphon said.

He said Manoon Chaichana, aka Anek Sanfran, a lese majeste suspect who lives in the United States, provided financial support for the plot.

The officer said Ms Nattatida knew Ms Supaporn and Ms Nattatida introduced Surapol Iam-suwan who was hired to plant bombs at the five locations — 10,000 baht for each location.

Ms Wassana then transferred an initial sum of 15,000 baht to Mr Surapol, but Mr Surapol failed to carry out the attacks at the five locations, Pol Maj Gen Chayaphon said.

He said the group behind the plot then contacted Weerasak Towanjorn, aka Yai Pattaya, who allegedly provided the RGD-5 grenade to Mahahin Khunthong and Yutthana Yenpinyo, who were sentenced Tuesday to five months in jail by the Criminal Court after they were found guilty of throwing a hand grenade into the court's car park on March 7.

Of the 17 suspects facing arrest warrants for the court attack, 12 have been arrested. Only Mr Manoon, Jessadapong Wattanapornchaisiri, Mr Weerasak, Mr Wasu and Mr Surapol are still at large. 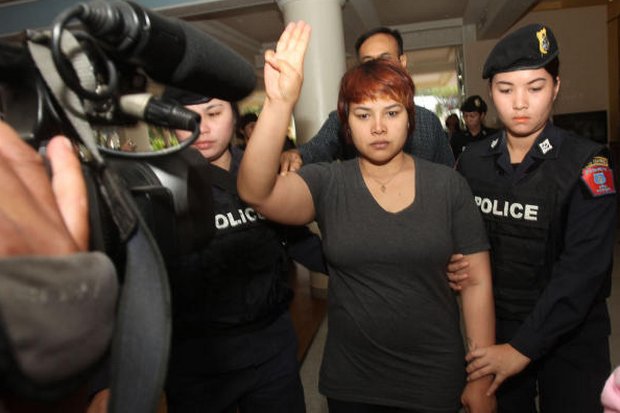 Ms Nattatida is a key witness in the Wat Pathum Wanaram killings during the final army sweep against red shirt protesters in 2010. She was finally produced for the media on Tuesday, a day after junta spokesmen aggressively attacked the press and her lawyers for claiming the army was involved in disappearing her.