This Thai trawler packed with more than 300 Rohingya was intercepted off the Bangladesh coast as it was setting off for Thailand. (Courtesy of Bangladesh Coast Guard)

An integral part of Prime Minister Prayut Chan-o-cha's drive to combat human trafficking is improvements in coordination and cooperation between police, prosecutors and the courts.

"The prime minister wants Thailand to adopt a systematic approach to address the root cause of human trafficking," a senior government official source told the Bangkok Post.

This means rooting out the leaders of trafficking networks as well as filing criminal charges against any government officials involved, the official added.

He ordered police to compile a review and progress report of 280 human trafficking cases in 2014, which has just been delivered.

In the past, the Ministry of Social Development and Human Security was tasked with monitoring human trafficking cases and could only seek cooperation from authorities for action.

But a key revamp under way is how police, prosecutors and the courts collaborate, said officials working to improve the system.

In the past, the investigation, prosecution and judicial process did not have a specific time frame because of a lack of coordination between agencies.

Under Gen Prayut's national agenda, police and prosecutors have 84 days to complete their investigations and send each case to the courts.

The head of the Supreme Court has issued recommendations to judges that human trafficking cases be considered special cases and must be completed within six months. 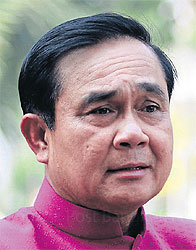 If there is any reason for a delay in a verdict, the judge responsible must report the reason to their superiors and request an extension. Once an extension is granted, it will only last for six months and a verdict must be delivered. This new procedure applies to all trafficking cases involving Thais or foreigners.

The establishment of a special human trafficking unit within the Criminal Court is being considered so the head of the Supreme Court can transfer important cases to a central hub.

Judges are also recommended to allow pre-trial depositions to commence immediately when asked by prosecutors.

Judges should also allow witnesses, especially women and children, to testify without having to face defendants.

They may also be questioned by a psychologist or social worker.

A process is under way to establish special rooms in courts in each province that will be equipped with two-way mirrors to prevent a defendant from seeing witnesses.

These rooms have already been built in newly constructed courts but will be expanded to all courts.

In order to overcome delays in testimonies by victims, especially foreign workers who may have left Thailand or are working elsewhere, the courts have allowed testimonies to be given via videoconferencing.

The Office of the Attorney-General (OAG) and the Office of the Courts of Justice have also agreed that cases tried under the Prevention and Suppression of Trafficking in Persons Act (2008) would be dealt with promptly and in a consistent manner.

The OAG plans to collate all data in a centralised manner for effective monitoring of cases.

Indictment proceedings against suspects should not be postponed for longer than three months.

Government sources say that officials suspected of involvement in trafficking will be transferred while an investigation is carried out.

Criminal charges would be filed on top of disciplinary action if there is evidence that they are involved in trafficking.

In instances where trafficking cases occur in remote areas and local police do not have expertise, experienced officers will be sent to conduct questioning of witnesses.

Proper questioning facilities need to be set up and NGOs, translators and psychologists can be present, especially if the victims are minors.

On Monday, Deputy Prime Minister Prawit Wongsuwan said efforts are under way to develop a computerised database of all human trafficking cases.

Police, prosecutors and the courts are working to link their cases under this database so trafficking cases can be tracked. No such system exists at present.

Prime Minister Prayut is expected to outline details of the national agenda items at a meeting of prosecutors and provincial governors soon to drive home the fact that changes initiated in Bangkok must also be carried out upcountry.

The US downgraded Thailand to its lowest human trafficking rating — Tier 3 — in its annual global Trafficking in Persons report.

The government is preparing an update on action taken against human trafficking in a report to be submitted to the US at the end of this month.