Cargo movements from Tak province to Myawaddy resume as Myanmar soldiers reopen ports along the Moei River that had been closed over a dispute about fuel imports from Thailand. (Photo by Assawin Pinitwong)

Myanmar soldiers reopened ports on the Moei River opposite Tak province to trade on Tuesday night after Thai authorities allowed oil exports to resume through pipelines to Myawaddy. 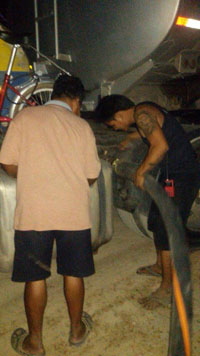 Myanmar soldiers had closed 23 ports on the river bank on Tuesday morning. This followed Thai officials' recent decision to ban fuel deliveries through pipelines. They said the road tankers must take their cargoes across  the Thai-Myanmar friendship bridge from Mae Sot.

The bridge cannot support big, fully laden fuel trucks, which instead usually offload their oil to the pipelines. Thai officials said their export licences required the fuel be delivered across the river by road, and banned pipeline deliveries.

The strict controls on the Thai side stalled about 40 oil tankers in Mae Sot, resulting in a fuel shortage in Myawaddy for nearly two weeks.

Tak governor Somchai Hathayatanti said after meeting local authorities on Wednesday that the BGF, led by Maj Gen Maung Chit Htoo, had closed all river 23 ports on the Myawaddy side to imports from Mae Sot via Mae Ramat to Tha Song Yang district.

The problem was resolved when oil exports via  the pipelines to Myawaddy were again permitted on Tuesday night.

Thai officials set a condition that operators must improve oil pipeline safety to meet proper standards within 30 days, he said.