The Singapore-owned train stopped at Kanchanaburi station on Monday night and the graffiti — which read "TGBM" and "TGBM 2015" — was discovered on the exterior of one of its 22 carriages at 3am Tuesday when security guards were patrolling the station. Officials said they did not know what the initials meant.

The vandalism was found on the fourth carriage, a passenger sleeping car, said Prasob Phoosarmsai, a Kanchanaburi railway official.

He said the luxury train was scheduled to leave the station at 8am. The spray paint was almost non-removable, so authorities had to use white and green duct tape to cover the images as an ad hoc measure. The train, No 951, was due to travel to Malaysia and Singapore after departing Thailand.

Mr Prasob said CCTV at the station was not able to capture those responsible as the spot was dark and far from the security camera. Rail officials have filed a complaint with local police.

Mr Prasob said no such incident had occurred before and he implored those responsible to stop damaging the property of others. He said the behaviour hurt both the reputation of Kanchanaburi and the country. He expected police would find the culprits soon.

It was the second incident to hit the plush rail service this year. In February, a fire broke out in the front locomotive shortly after the train left Kanchanaburi.

The driver disconnected the burning locomotive after spotting the flames, and no one was injured.

The Eastern and Oriental Express is run by the British hotel and leisure firm Belmond, formerly known as Orient-Express Hotels. 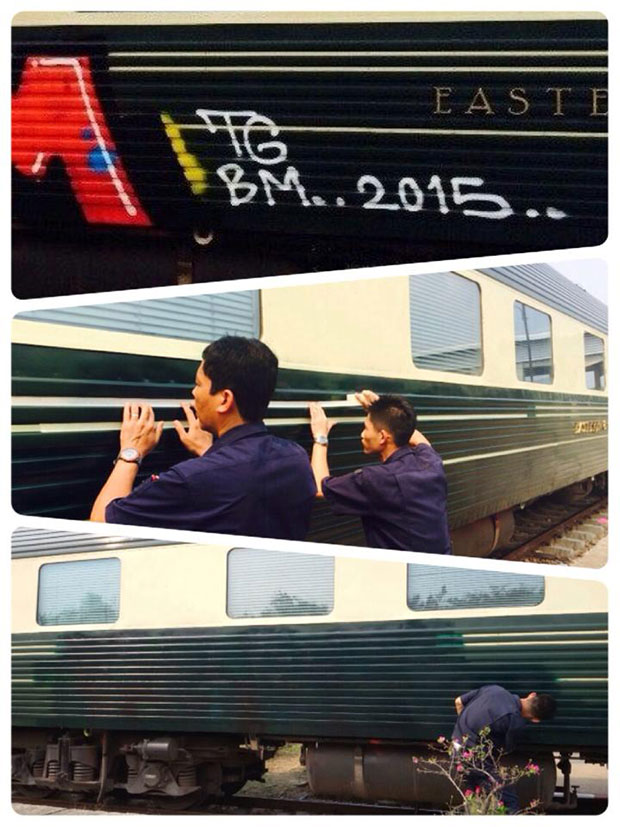