This AP photo, taken last November, shows Thai and Burmese fishing boat workers inside a cell at the compound of a fishing company in Benjina, Indonesia. The imprisoned men were considered slaves who might run away. They said they lived on a few bites of rice and curry a day in a space barely big enough to lie down, stuck until the next trawler forces them back to sea. (AP Photos)

The Burmese slaves sat on the floor and stared through the rusty bars of their locked cage, hidden on a tiny tropical island thousands of kilometres from home.

Just a few metres away, other workers loaded cargo ships with slave-caught seafood that clouds the supply networks of major supermarkets, restaurants and even pet stores in the United States.

Here, in the Indonesian island village of Benjina and the surrounding waters, hundreds of trapped men represent one of the most desperate links criss-crossing between companies and countries in the seafood industry.

This intricate web of connections separates the fish we eat from the men who catch them, and obscures a brutal truth: Your seafood may come from slaves.

The men we spoke to on Benjina were mostly from Myanmar, also known as Burma, one of the poorest countries in the world. They were brought to Indonesia through Thailand and forced to fish. Their catch was shipped back to Thailand, and then entered the global commerce stream.

Tainted fish can wind up in the supply chains of some of America's major grocery stores, such as Kroger, Albertsons and Safeway; the nation's largest retailer, Wal-Mart; and the biggest food distributor, Sysco.

It can find its way into the supply chains of some of the most popular brands of canned pet food, including Fancy Feast, Meow Mix and Iams. 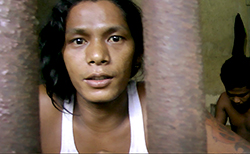 In this Nov. 27 image from video, Kyaw Naing, a slave from Myanmar, looks through the bars of a cell at the compound of a fishing company in Benjina, Indonesia. After working for three years on a Thai trawler, sometimes enduring beatings with the bones of sting ray, he begged his captain to let him return home. "All I did was tell my captain I couldn't take it anymore, that I wanted to go home," Kyaw Naing says. "The next time we docked, I was locked up." (AP photo)

It can turn up as calamari at fine dining restaurants, as imitation crab in a California sushi roll or as packages of frozen snapper re-labeled with store brands that land on our dinner tables.

In a year-long investigation, the AP interviewed more than 40 current and former slaves in Benjina. It documented the journey of a single large shipment of slave-caught seafood from the Indonesian village, including squid, snapper, grouper and shrimp, and tracked it by satellite to a gritty Thai harbour.

Upon its arrival, AP journalists followed trucks that loaded and drove the seafood over four nights to dozens of factories, cold storage plants and the country's biggest fish market.

Some fishermen, risking their lives, begged the reporters for help.

"I want to go home. We all do," one Burmese slave called out over the side of his boat, a cry repeated by many men. "Our parents haven't heard from us for a long time, I'm sure they think we are dead."

Their catch mixes in with other fish at numerous sites in Thailand, including processing plants. US Customs records show that several of those Thai factories ship to America. They also ship to Europe and Asia, but the AP traced shipments to the US, where trade records are public.

National Fisheries Institute spokesman Gavin Gibbons, speaking on behalf of 300 US seafood firms that make up 75% of the industry, said his members are troubled by the findings.

"It's not only disturbing, it's disheartening because our companies have zero tolerance for labour abuses," he said. "These type of things flourish in the shadows." In this Nov. 27 image from video, workers from Myanmar load fish onto a Thai-flagged cargo ship in Benjina, Indonesia. (AP photo)

The slaves described 20- to 22-hour shifts and unclean drinking water. Almost all said they were kicked, beaten or whipped with toxic stingray tails if they complained or tried to rest. They were paid little or nothing.

Runaway Hlaing Min said many died at sea. "If Americans and Europeans are eating this fish, they should remember us. There must be a mountain of bones under the sea," he said. "The bones of the people could be an island, it's that many."

The small harbour in the village is occupied by Pusaka Benjina Resources, whose five-storey office compound includes the cage with the slaves. The company is the only fishing operation on Benjina registered in Indonesia, and is listed as the owner of more than 90 trawlers.

However, the captains are Thai, and the Indonesian government is looking to see if the boats are really Thai-owned.

Pusaka Benjina did not respond to phone calls and a letter, and did not speak to a reporter who waited for two hours in the company's Jakarta office. 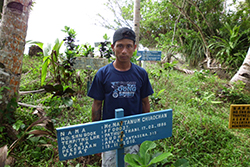 In this Nov. 26 image from video, Hla Phyo stands next to a grave marker of a man he helped bury, a Burmese fisherman slave who died on a fishing boat, at a cemetery in Benjina, Indonesia. Hla Phyo, a former slave, said conditions on the Thai-run trawlers were horrific. According to him, many were brutally beaten by the Thai crew overseeing them. (AP photo)

"We only carry the shipment and we are hired in general by clients," said company owner Panya Luangsomboon. "We're separated from the fishing boats." The AP followed that ship, using satellite tracking over 15 days to Samut Sakhon and journalists watched as workers packed the seafood over four nights onto more than 150 trucks, following deliveries to factories around the city.

Inside those plants, representatives told AP journalists that they sold seafood to other Thai processors and distributors. US Customs bills of lading identify specific shipments from those plants to American firms, including well-known brand names.

For example, one truck bore the name and bird logo of Kingfisher Holdings Ltd, which supplies frozen and canned seafood around the world. Another truck went to Mahachai Marine Foods Co, a cold storage business that also supplies Kingfisher, according to Kawin Ngernanek, whose family runs it.

When later asked about abusive labour practices, Mr Kawin was not available. Instead, Mahachai Marine Foods manager Narongdet Prasertsri responded: "I have no idea about it at all.'' Kingfisher did not answer repeated requests for comment.

Every month, Kingfisher and its subsidiary KF Foods Ltd sends about 100 metric tonnes of seafood from Thailand to America, according to US Customs records. These shipments have gone to Stavis Seafoods, a Boston-based Sysco supplier, and other distributors.

"The truth is, these are the kind of things that keep you up at night," said CEO Richard Stavis, who grandfather started the company. He said his business visits international processors, requires notarised certification of legal practices and uses third-party audits.

"There are companies like ours that care and are working as hard as they can," he said.

A similar pattern repeats itself with other companies and shipments. 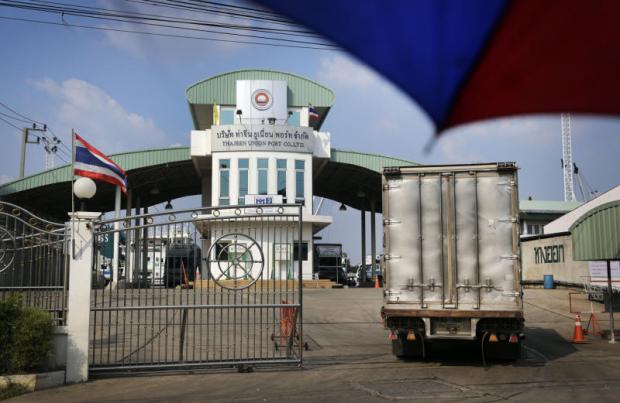 Weeks later, when confronted about forced labour in their supply chain, Niwat referred several requests for comment to Mr Prasert, who could not be reached for further comment.

Thai Union says its direct clients include Wal-Mart, and ships thousands of cans of cat food to the US every month, including household brands like Fancy Feast, Meow Mix and Iams.

These end up on shelves of major US grocery chains, such as Kroger, Safeway and Albertsons, as well as pet stores. Again, however, it's impossible to tell if a particular can of cat food might have slave-caught seafood.

Thai Union said it takes multiple stakeholders to eradicate labour abuses. "We all have to admit that it is difficult to ensure the Thai seafood industry's supply chain is 100% clean," Thai Union CEO Thiraphong Chansiri said.

The enslaved fishermen on Benjina had no idea where the fish went, only that it was too valuable for them to eat. Their desperation was palpable. 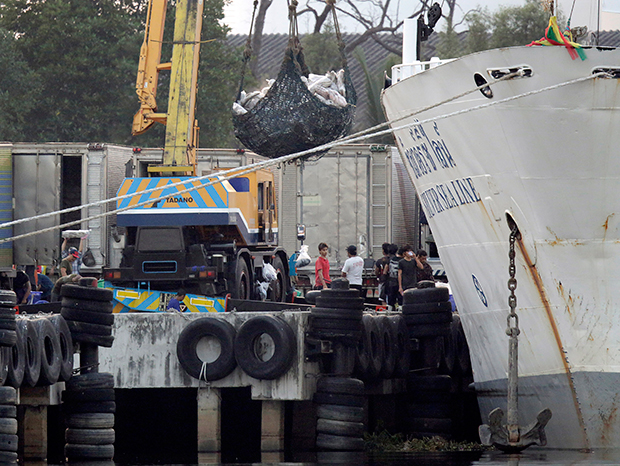 In this Dec. 11 photo, frozen seafood is off-loaded from a refrigerated cargo ship called the Silver Sea Line, a 3,000-tonne cargo ship, at Thajeen port in Samut Sakhon, 15 days after it set sail from Benjina, Indonesia. The ship belongs to the Silver Sea Reefer Co, which is registered in Thailand and has at least nine refrigerated cargo boats. The company said it is not involved with the fishermen. “We only carry the shipment and we are hired in general by clients,” said owner Panya Luangsomboon. “We're separated from the fishing boats.” (AP photo)

A crude cemetery holds more than 60 graves strangled by tall grasses and jungle vines. The small wooden markers are neatly labeled, some with the falsified names of slaves and boats. Only their friends remember where they were laid to rest.

In the past, former slave Hla Phyo said, supervisors on ships simply tossed bodies into the sea to be devoured by sharks. But after authorities and companies started demanding that every man be accounted for on the roster upon return, captains began stowing corpses alongside the fish in ship freezers until they arrived back in Benjina.

"I'm starting to feel like I will be in Indonesia forever," said Phyo, wiping a tear away. "I remember thinking when I was digging, the only thing that awaits us here is death." 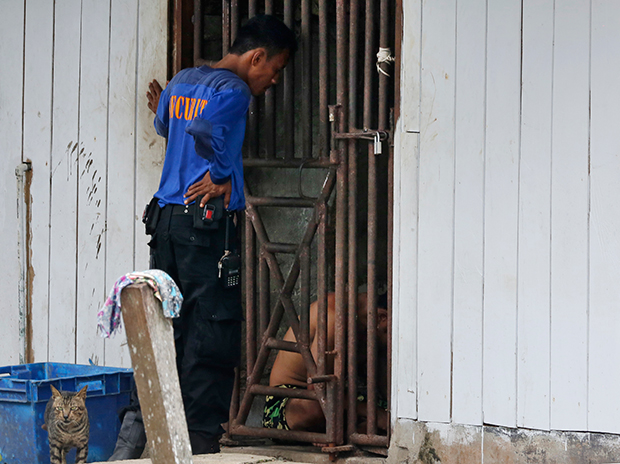 In this Saturday, Nov. 22, 2014 photo, a security guard talks to detainees inside a cell at the compound of a fishing company in Benjina, Indonesia. The imprisoned men were considered slaves who might run away. They said they lived on a few bites of rice and curry a day in a space barely big enough to lie down, stuck until the next trawler forces them back to sea. (AP photo)