These are markers on some of the graves of more than 80 Thai fishermen, most or all of them slaves, who never made it home from Benjina Island, Indonesia. The island is a popular site for trawler owners to unload the catch from trawlers, before sending it by refrigerated ship back to Thailand for packing and export. (Photos courtesy of Thapanee Ietsrichai)

Police are digging deeper into 1,300 human trafficking cases in the latest drive to break up sophisticated networks and seek justice for the victims.

In an exclusive interview with the Bangkok Post, deputy national police chief Aek Angsananont said he has instructed state agencies to go over the cases with a fine-tooth comb and decide which ones need to be investigated further.

The 1,300 cases date back to the day the 2008 Anti-Human Trafficking Act was introduced, he said.

"I've ordered another look into these cases. If the police think they can expand the investigation into any of these cases, they must proceed," said Pol Gen Aek, who has been assigned by national police chief Somyot Pumpunmuang to head the anti-human trafficking crime drive.

Police decided to review the cases after the government declared it was taking a zero-tolerance stance against trafficking.

However, non-governmental organisations are adopting a "wait and see" approach.

Police have been ordered to pay special attention to 280 human trafficking cases which took place last year and 50 cases which have occurred since January this year, according to Pol Gen Aek.

Police hope to gather systematic information to break up the human trafficking networks, bring the perpetrators to justice and ensure justice for the victims.

The cases are being placed into four groups — prostitution, forced labour, organised begging and the smuggling of Rohingya people to a third country.

"We expect to get things in order by next month. We have drawn a timeline and set a clear goal in our operations," he said.

The Royal Thai Police Office (RTPO) has also tried to raise awareness about human trafficking among its officers and train them on how to detect when a person is being trafficked, according to Pol Gen Aek.

He said officers are using mobile chat applications to update operations related to human trafficking to commanding officers at the RTPO.

Police Region 8 Bureau, in charge of the southern region which is identified as a transit hub for smuggled Rohingya, has gone a step further by engaging the community in helping combat the problem.

"They send police to schools to talk about the problem of human trafficking and how the community can act as eyes and ears for police," Pol Gen Aek said.

Most victims of forced labour and illegal migrant workers who travel to the inner provinces come through border checkpoints in the northern and western regions, especially in Tak and Kanchanaburi.

Northeastern provinces have been identified as a transit point for the trafficking of women from Laos and Sa Kaeo's Aranyaprathet district is popular for organised begging.

The trafficking of Rohingya asylum seekers happens mainly in Ranong.

Based on intelligence information, police have identified 10 networks which are involved in the trafficking of Rohingya asylum seekers.

Arrest warrants have been issued for nine people suspected of trafficking Rohingya.

They will also face charges of money laundering.

He said the core agencies in charge of suppression and prevention are the Metropolitan Police Division 1-9, Provincial Police Region 1-9, and Southern Border Provinces Police Operation Centre.

The Anti-Human Trafficking Division, which is under the Central Investigation Bureau, acts as a supporting agency and is also responsible for expanding any investigations into existing cases.

"We work with NGOs, the private sector, and other agencies with good understanding. We have initiated projects where they can join hands, not only the NGOs but also those in the fisheries industry," he said.

Pol Gen Aek said he hopes the United States gives Thailand a fair assessment when it prepares the next annual global Trafficking in Persons report.

The US downgraded Thailand from Tier 2 to Tier 3 of the TIP report in June last year.

"We are doing all this not because of the TIP report, but we are aware of a need to improve the police's understanding and handling of the human trafficking problem,'' he said.

It is impossible for the police to prevent illegal activities, but when they do happen, we have to respond effectively and strengthen our preventative measures."

He said their release is part of the government's efforts to seek the repatriation of Thai fishermen who have been arrested or left stranded in Indonesia.

Maj Gen Sansern said Prime Minister Prayut Chan-o-cha is pushing for long-term solutions to a wide array of problems in the fisheries sector.

Under the prime minister's directive, authorities are compiling a list of fishing trawlers and operators with records of illegal activities such as illegal fishing and forced labour. 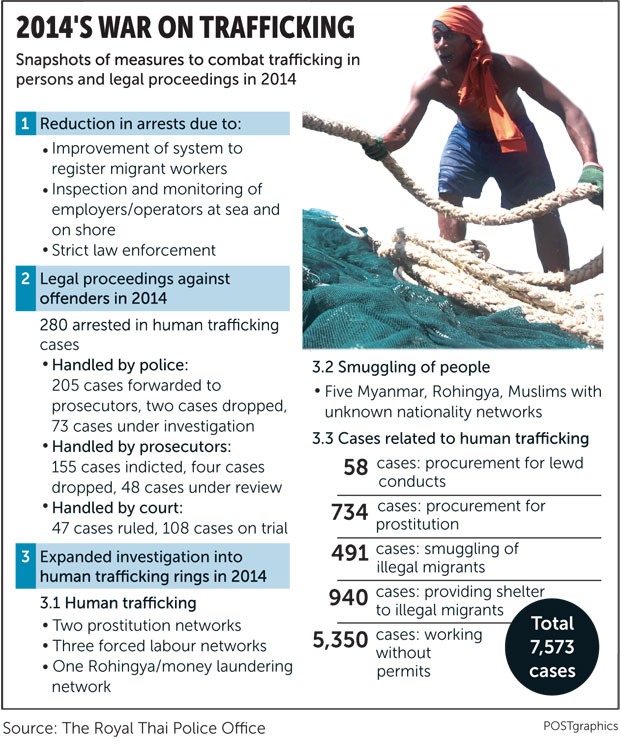