Eight Russian tourists were detained, and two of them charged with possessing and selling marijuana and bamboo pipes for smoking it online, on Koh Phangan in Surat Thani, police said on Wednesday. 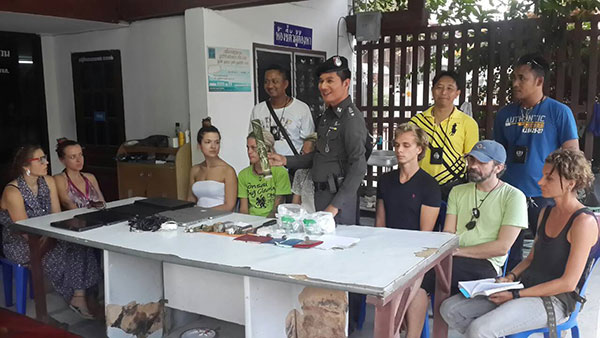 A police officer shows a carved bamboo pipe used for smoking marijuana following a raid on two houses on Koh Phanan island on April 1 in which eight Russian tourists were detained, and  two of them charged with possessing and selling marijuana and bamboo pipes for smoking it on Facebook. (Photo by Supapong Chaolan)

Pol Col Pachum Ruengthong, chief of Koh Phangan police, announced the arrest of the three men and five women following a raid on two rented houses on the island.

Armed with court warrants, police searched the first house where the eight Russian tourists were found chatting on the first floor of the two-storey building.

The officers found traces of cannabis, along with a knife, a rubber sheet and a pipe all used for preparing and smoking marijuana. The pipe was carved and similar to one that was pictured on a Facebook page offering marijuana and smoking implements for sale. On the second floor police found some compressed cannabis in a travel bag.

In the nearby second house police found some compressed marijuana hidden in a rice cooker. The drugs seized from the two houses weighed a total of 304 grammes.

The Russians allegedly told police they were friends and used the houses as places to meet and party. They said the carved pipe was made for their own use and allegedly admitted having sold marijuana to foreigners online, saying they were not aware it was illegal in Thailand.

Pol Col Prachum said two men, each aged 29, admitted that the drugs and other seized items belonged to them.  Police recorded personal details of the other six Russians, while pressing charges of illegal possession of category 5 narcotics against the two men before handing them to investigators for legal action.

The arrest followed a police investigation of a now-deleted Facebook page called Bong Russian Boss, which advertised homemade bamboo bongs (water pipes for smoking marijuana) and featured photos of a man lying down near marijuana plants.