In this Nov 22 image, Kyaw Naing, a slave from Myanmar, talks to a security guard through the bars of a cell at the compound of a fishing company in Benjina, Indonesia. (AP photo)

BENJINA, INDONESIA — Officials from three countries are travelling to remote islands in eastern Indonesia to investigate how thousands of foreign fishermen wound up there as slaves and were forced to catch seafood that could eventually end up being exported to the United States and elsewhere.

A week after The Associated Press published a yearlong investigation into the problem -- including showing men locked in a company cage -- delegations from Thailand and Indonesia visited the island village of Benjina. Officials from Myanmar are scheduled to visit the area next week to try to determine how many of their citizens are stuck there and what can be done to bring them home.

"No one seemed to be aware of the problem, and now that they are, they want to do something as quickly as possible," said Steve Hamilton, deputy chief of mission at the International Organization for Migration, or IOM, in Indonesia, which is working with authorities to assist the fishermen.

In Benjina, some officials saw a graveyard where dozens of fishermen are buried. Others talked to men who have been stranded there for months or even years after being brought to Indonesia from Thailand and forced to work under brutal conditions on boats with Thai captains. 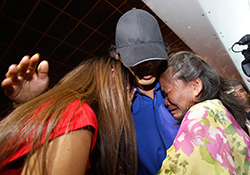 Pharak Yophasee hugs her son Wutthichai Yophasee, 30, after his return from Ambon island, Indonesia, at Don Muang airport March 27. 2015. Mr Wutthichai is among 21 men the Thai authorities have helped bring back to their home country after some of them were lured by human traffickers to work on fishing boats in the Indonesian waters. (AP photo)

One of the leaders of the Indonesian group, Ida Kusuma from the Fisheries Ministry, said she found the slavery reports very upsetting and that the government intends to take action.

"We (will) prove that we don't want to let it happen anymore," she said while visiting the neighbouring island of Tual on Tuesday before travelling to Benjina on Thursday. "I think the company who hired them should take full responsibility to bring them to their families."

The IOM said last week there could be as many as 4,000 foreign men, many trafficked or enslaved, who are stranded on islands surrounding Benjina following a fishing moratorium called by the Indonesian Fisheries Ministry to crack down on poaching. Indonesia has some of the world's richest fishing grounds, and the government estimates billions of dollars in seafood are stolen from its waters by foreign crews every year.

The AP found dozens of current and former slaves from Myanmar in Benjina. Some called out to reporters from their trawlers, saying they wanted to go home but that their captains would not allow them to leave.

They described horrendous treatment, saying they were forced to drink unclean water and work 20- to 22-hour shifts with no days off. Almost all said they were kicked, whipped with toxic stingray tails or otherwise beaten if they complained or tried to rest. They were paid little or nothing.

This week in Ambon, the provincial capital, other runaways from Cambodia and Laos also told of years of abuse on the islands. A number of mistreated Thai workers have also been located, and some have already been repatriated.

The AP investigation used satellites to track seafood caught by the slaves from a large refrigerated cargo ship in Benjina to Thailand. The investigation linked the seafood to supply chains of some of America's largest supermarkets and retailers.

The report prompted the US government and major seafood industry leaders to urge Thailand to end slavery at sea and to punish those responsible. Thailand's biggest seafood company, Thai Union Frozen Products, announced it was cutting ties with a supplier after determining it might be involved with forced labor and other abuses.