Thai plane in repair after food truck crash in Paris

Thai Airways International (THAI) confirmed on Thursday that its Airbus A380 was damaged in an accident in which an airport vehicle carrying in-flight food crashed into the aircraft wing while it was parked at Charles de Gaulle Airport in Paris. 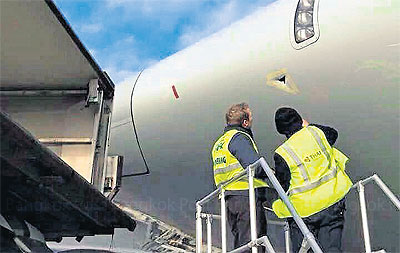 The aircraft, which serves a scheduled flight from Paris to Bangkok, is now grounded for at least two days for repairs, Mr Charamporn said.

Passengers who were booked on the THAI flight were transferred to other airlines. "We have already taken care of those passengers," he said.

No details were available on how long they had to wait.

An empty THAI Airbus flew to Paris to replace the damaged aircraft and prevent any further interruption to flight services on the route, Mr Charamporn said.

Transport Minister ACM Prajin Juntong said the accident is the fault of the airport ground service provider, but should be rectified within three days. A team has been sent to the airport to inspect the damage to the craft, he said.